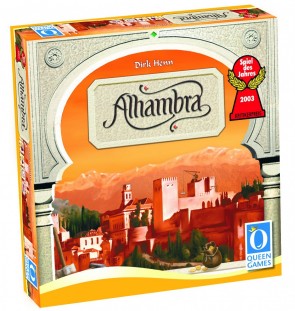 Alhambra, winner of the Spiel des Jahres 2003, is considered by some to be one of the "Big Three" German style family games that propelled Eurogames to the forefront of hobby gaming. The other two being Settlers of Catan and Carcassone.

We can quibble over whether or not Alhambra deserves to be included among the "Big Three," the extent of its influence, and its role in the trend of naming games for places. However, we cannot deny that at one point in time it was a game that every hobby gamer knew. It was one of the go-to games that you could slap down on a table and just start playing, because everyone had played and knew the rules.

Although Alhambra has remained in print for over a decade and spawned 6 expansions, as well as the Alhambra Card Game, it seems to have faded in popularity. Where once the answer to the question, "What games introduced you to hobby gaming?" typically included Alhambra, now the answer is more likely to include Dominion or Pandemic.

Has Alhambra not held up over the years? Or is it simply that Alhambra is not available at Target? What do you think? Love it or hate it? Do you still play it?

Discuss this article
Log in to comment
Posts in discussion: Flashback Friday - Alhambra - Love It of Hate It?

Shellhead replied the topic: #301695 13 Sep 2019 12:39
I think that I played Alhambra once back in the day, when a couple of my friends were all into the Eurogames. Those days are a bit of a blur, because all of those low-interaction games with drab themes tend to leave only trace memories.

It’s a good game, it has that vintage Sackson/Randolph kind of feeling. Not sure if it was really SDJ material and in retrospect it seems like one of the lesser SDJ titles. Never played any of the expansions.

jpat replied the topic: #301701 13 Sep 2019 13:17
It's mildly entertaining. It's sort of like El Grande only in the sense that it has a big-box version and a lot of expansions but they're rarely if ever played, it seems like. It has a fun spatial and tile-orientation element and an interesting thing going on with the money, but it's like a lot of these games 20 or so years into the board game renaissance: it'd be perfectly fine to play, but there's also no particular reason to.

Sagrilarus replied the topic: #301705 13 Sep 2019 13:56
Jeeze. I really like Alhambra. It's one of my favorite Euros, especially when played naked (i.e., no expansions). There's two or three different factors in every decision that are all in opposition with each other, it's relatively quick and easy to teach. For the genre I think this one hits on all 8.

The expansions just add glop to the mix, a bunch of additional options that take the edge off the game. Unfortunately the only way to buy it now is the "Big Box" version which means everyone is paying double what they should be.

This was an early Tanga buy for me. Remember Tanga? It's what everyone hated before there was Kickstarter.

Thank you much for your purchase from Tanga.

You will soon be the recipient of 1 The Palace of Alhambra and your order number is 61. The order has been received on Mon Oct 16 19:46:07 PDT 2006 and your credit card has been charged $15.99. Your order will typically ship out within three business days so thank you in advance for your patience and your undying love.

If you can’t stand it any longer and want to track the status of your order every other minute, you can login to the My Account page by going to www.tanga.com . From there, check your order history and click on the tracking number to virtually trace your product to your home.

If there are any problems with this order or any discrepancy, please email This email address is being protected from spambots. You need JavaScript enabled to view it. immediately so we can try to straighten it out. However, in the event that you have ordered a hot product and it has sold out, trying to change the quantities at this point will be tough so you may not like the answer you receive (i.e. No!)

When you write us any emails regarding your order, ALWAYS include your username and order number or you will not pass go and you will not collect $200. We may even come over to your residence or place of employment and beat you with an ugly stick.

If you would like to discuss this particular product with like-minded individuals who have nothing better to do than to stay up at night and hit refresh on a web site in order to see what the next hot deal is, you can go here: link to blog of product.

Thank you again for supporting Tanga.com where our products are Here Today, Gone Tomorrow!

mc replied the topic: #301713 13 Sep 2019 17:16
My partner got me this game as a present, an incident which made me start putting lists together. I didn't ask for this, it's boring, and the theme makes no sense, were my main thoughts.

Over the years I've come to appreciate it though. It's far from my favourite game but I'm happy enough to play it. It's a tight little system - exact money, playing for the majorities. I've looked at the expansions and most seem to dilute it, although with the kids we play with a "Vizier's purchase" house rule so once a game they can reserve a tile and save the despair, but that's as far as you'd want to go, I think.

Granada, with it's less set scoring has always interested me but I've got no desire to chase it up.