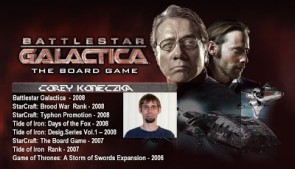 Designer
Corey Konieczka
There Will Be Games

I argue that Corey Konieczka is the best designer of the last ten years. His productivity is amazing, and when one goes through and categorize his games from the last ten years it becomes hard to stack anyone against him in both creativity and craft.

I’m willing to make a controversial statement---Corey Konieczka is the best designer of the past 10 years, and it isn’t even particularly close. Because he’s at FFG, I think we associate his games with some sort of FFG collective hivemind production. But I think you’ll see, as I did yesterday when I looked at his designer listing after playing my first game of the (brilliant) Gears of War, that he is the most consistently creative designer going today and his record is amazing. He’s also batting a high percentage, with even (most) of his failures creative and interesting. What struck me is that he has basically driven the creation/popularization of a number of genres that are now hot. The stuff that sucks that comes out of FFG? It almost never has his name associated with it.

The craziest shit is that his first design credit is in 2006. His volume of excellent work in such a short period is staggering. Best way to show it, I think, is by going through his games and point out what is new/great about them. I’ve put them in what I consider broad categories. Final caveat is that some of these games are codesigned, but it’s hard to say who had the dominant role and if his name is listed as designer I feel he was involved enough to consider it his work.

2008 Battlestar Galactica---essentially popularized and blew up the traitor mechanic that fills shelves these days. You’ll see that this becomes a theme, Corey is the man who launches a thousand games in new genres. He has made a lot of people not at FFG, indirectly, a lot of money. In this case, his take on it is still amongst the very best, especially if you just consider the base game.

2011 Gears of War---Corey K finally gets around to making major improvements to the dudes in a hall genre. It’s one of the first really original takes on the genre (IMHO) in many years. The problem is he is saddled with a dud of a license from a popularity perspective. This engine is DYING to step in and replace the creaky ass Warhammer Quest direction this genre has been taking for 30 years.

2007 Starcraft---a couple of things. First, if you’ve ever played computer Starcraft, this game simulates a game of Starcraft extremely well. Constant combat, very little defensive play, and lots of special ability activation. Oh yeah, and research, buildings, etc. OH HAY, DON’T FORGET THAT THIS IS ONE OF THE FIRST MAINSTREAM USES OF THE DECK BUILDING MECHANIC EVER (Dominion published in 2008)! Also ahead of its time in another respect: it attaches deck building as a mechanic to a game instead of trying to figure out how to make a game only deck building.

2010 Runewars--- an attempt to distill the TI:3 4x experience (which he fixed, remember!) in a shorter time frame. Largely successful. In particular, the engine that underlies the game is great (orders system) and the resource generation system streamlines the shit out of this genre. Rather than counting little tokens or how many resources you have, you’re adjusting a track that tells you exactly how many of a thing will be built at a glance, without endless buy/sell math. Heroes system is a bit controversial, but I would argue largely because most people simply want the heroes to be generals and not questing heroes. Solid expansion to this, as well.

2012 X-Wing Miniatures---yep, the current engine behind FFG’s success is a Corey K joint. Of course, we can’t really say that it’s a creative work since it cribs the Wings of War system. But a solid editing of that system to make it simple, easy and therefore popular. It’s hard to argue this isn’t an excellent genre addition that deserves its success. It’s a fun little game.

2006 Warrior Knights---the reimplementation of GW’s Warrior Knights. My understanding is that it’s pretty close to the original with a few editorial changes. I’ve never played it, but most people seem to think it’s a solid game in the genre. I believe most people also think it’s better than its GW predecessor.

Fixing Other People’s Fucked Up Work

2006 TI3 Shattered Empires---Yes, one of his first designs. The start of Corey’s career sees him fix the (now) definitive space empires game into a fantastic game. Widely acclaimed as one of the best expansions of all time.

2012 Descent 2nd edition---Corey K. essentially cleans up Kevin Wilson’s messy original---and his take is widely considered the better game (there is controversy on that). While I don’t like the resulting game myself that much, it’s certainly better than the sprawling first take. I played an agonizing first edition descent game in the best possible circumstances and would never play it again. By contrast, I would play 2nd edition if everyone else really wanted to.

2013 Eldritch Horror---see last entry. Corey again comes in and cleans up an ugly Wilson design. I prefer the original Launius/Wilson design in this case, but as a competitive game (and not a sort of leisurely freeform cooperative activity), I have little doubt that this is the superior design. This game is finally starting to get some serious positive press at F:AT among members.

2011 Mansions of Madness---the first miss on this list. A noble miss, however. I would argue the problem with this game does in part lie with the designer but should mainly be left at the feet of the developer. Moreover, it’s impossible to argue that this is not a creative and interesting failure in the genre.

2009 Middle Earth Quest---acclaimed among some for its creative mechanics but also disliked in some corners, it’s another creative attempt that wasn’t the failure Mansions was but is nothing special. I haven’t played it, but have heard many say its mechanics are incredibly interesting but don’t fit the license well.

2008 World of Warcraft Adventure Game---I’m putting this in failures, because securing one of the largest licenses (then) in the world and then not having great sales success has to be considered a failure. There are some strong supporters of the game (ubarose comes to mind), and there’s no question it is an unusual take on the genre. It would have been easy to make a World of Warcraft game another dudes in a corridor game with a slightly expanded leveling system. Instead, Corey K turns it into a very big picture questing game.

2011 Runeage---I could have also placed this in the creative failures, but I think given the middling reaction to this copycat deckbuilder I’ll put it here. I’ve never played it, but it looks solid. What is creative about it, in my view, is the way it tries to incorporate multiple types of gamer (pure conflict, vs. pure deck builder non-direct, cooperation). Unfortunately, that’s a tall ask and only some of those scenarios really worked.

2012 Rex---I think we’d have to consider this a failure, but I would argue an inevitable failure for anyone tasked with theming Dune with a generic TI:3 universe. My understanding is that the game is fairly solid, it just is not nearly as good as the legendary Dune. So is this a failure? I’m not sure it’s a terrible failure, it’s just a meh redesign of an amazing game.

2007 Tide of Iron---this game… I don’t understand what niche it inhabits. But who at FFG was sitting around saying “We need a more complicated Memoir 44 so it’s not super beer and pretzels anymore but without any wargame cred either.” By all accounts around here, it’s not a bad game. I think it’s not one of his best efforts, though, and not terribly creative either.

It’s hard to believe how many good (or at least interesting) games are on this list from the last 8 years. Yet you would never hear someone label a game of his by its designer. There are some commonalities like maps or card mechanics but I think those are pretty weak. Something I find very interesting is that it’s rare to think of a “Corey K” game in the same way you would “oh yeah, that’s a Rosenberg or Feld.” He is less associated with his designs than the auteur designers. I think that’s a shame.

Discuss this article
Log in to comment
Posts in discussion: Corey Konieczka: Best Designer of the Last Ten Years