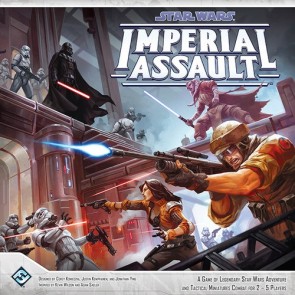 It's not widely known, but there was a sequence filmed for the end of The Empire Strikes Back that never made it into the final edit. In it Luke, Leia and Lando, supported by a squad of Rebel troopers, try and rescue Han from the carbonite freezing chamber. The rebels pour into the room, taking up positions and opening up fire on the Stormtroopers stationed there. It's pretty spectacular.

Several Stormtroopers get killed in the initial volley. But the remnants the arrival of an Imperial officer and a Stormtrooper commander rallies the rest. In response Luke and Leia wade in. She's latter laying down fire with the rebels. He's swinging his lightsaber left and right with blinding speed, hoping to strike down the officers. Meanwhile R2-D2, covered by Lando, is hacking the Cloud City network, downloading crucial intelligence.

Things don't work out. Luke kills his targets but has bitten off more than he can chew and gets surrounded by Stormtroopers and struck unconscious. They then dispose of Leia and her squad with brutal efficiency. R2, with the plans on board, puts up a valiant defence, electrocuting a Stormtrooper before he's overwhelmed and burnt by laser fire. It's a sad scene, and got cut for giving the film too much of a depressing ending.

Of course, none of this is real. It was a recent skirmish game of Imperial Assault, and it was thrilling, bringing the films to life in a way that no other Star Wars game has ever done for me. X-Wing and Armada look fantastic but they feel too impersonal. Even when Luke is riding in that X-Wing, it still has the generic stat line of an X-Wing. A single special power rule doesn't make the difference between a rookie and the galaxy's last Jedi Knight.

Skirmish mode, on the other hand, is a triumph of both tactics and storytelling. Every character have a unique set of stats and abilities. Each also comes with a card that enhances the narrative potential of the figure. The new Obi-Wan Kenobi pack, for example, has "I must go alone".  This helps the old man avoid ranged attacks as he strides forward to meet his grim destiny in lightsaber combat. Playing it as he dashes toward his intended target evokes a real sense of proud desperation. Much like that evoked by his final scene in Star Wars.

Campaign games don't use these cards. Indeed they make relatively scant use of the special characters generally, especially on the rebel side. The players want the focus to be on their heroes, after all. But what is Star Wars without Obi-Wan, or C3PO, or any one of the many characters who will, at best, having but a fleeting role in an ongoing campaign? With skirmish you can have whoever suits your taste at the time. And if you want to partner Greedo with Han so they can both shoot first then, hey, be my guest. So long as you're willing to spend the points on a Temporary Alliance card to do it.

Speaking of which squad building is way more fun and way more balanced in Imperial Assault than in the spaceship games. Even after a massive slew of single-figure expansions. With each one effectively having just one upgrade, there's almost no scope for min-maxing. So you don't get the ultra-optimised lists that rule X-Wing tournaments and ruin the game for casual players. Yet there's still enough detail in the rules to make squad building an interesting strategic challenge.

As is the game itself. You can run in, all guns blazing, but you'll almost certainly lose. If you stick to the random selection of missions then you've got a massive potential variety of maps and special rules for victory points. The winner in a skirmish is often determined by whoever makes best use of those extra points. Eliminating all the enemy figures without losing all of yours is hard, since dice tend to even out over time.

It also means that you can't tailor a list to specific victory conditions. You need to plan to have the firepower to deal with a huge number of scenarios. This feeds into the need to examine the map and the enemy list and react accordingly. If they're loaded up with Saboteurs or something else that brings blast surges, don't bunch your troops. Work the corridors, keep your distance. It's a great balance between being tactical enough to sustain interest and simple enough to stay fluid and thrilling.

The downside is the map building. Finding the right tiles to build a map is a pain, and their double-sided printing makes it worse. This problem plagued Descent too, and I've never found a solution. The new edition of Mansions of Madness has a limited number of room sizes which promises to be a big boon. But in Imperial Assault, we're stuck with this wretched jigsaw.

But it's not like the campaign mode doesn't have the same issue. And multiple times over too, as the story drags interminably on, long after everyone has tired of it. At least in a skirmish you can sit down with your opponent and be sure you'll be packing up around 2 hours later. Or possibly 4, or 6 if you factor in how fun and addictive it can be. Go skirmish. Run your favourite characters. Re-create the deleted scenes you always wanted to see. You know it's the way to go.

metalface13 replied the topic: #231747 10 Aug 2016 16:47
Nice review, Matt. I'll say I'm mostly curious about skirmish mode. What do you make of skirmishing in corridors in general? I've been thinking for a long while about making a ruleset for that kind of gaming. Like Necromunda meets Space Hulk.