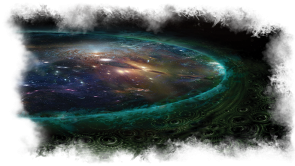 Game Name
Arkham Horror: The Card Game - Lost in Time and Space
Publisher
Fantasy Flight Games
There Will Be Games

Assuming that your adventure has not been cut short in the previous scenario Where Doom Awaits, you have stepped beyond the confines of the mortal plane into the unknown world beyond, through the Portal atop Sentinel Hill. 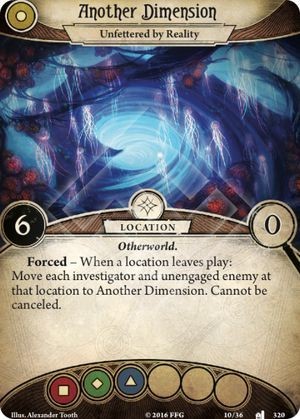 The setup to this scenario is relatively straight forward, but there is certainly an interesting thing to note during the process. Only one location Another Dimension, pay close attention, starts in play. The other locations are all in the Encounter deck that have a Revelation effect on them, putting them into play when drawn. The nature of the setup of a given scenario does mean that you get hints of what is to come: so this one tells you that the locations are going to appear a bit at random, very different from what has gone before.

Standing at the edge of a different reality the first question is ‘Now what?’. Well let’s have a look at the top of the Agenda and Act deck for how this is going to go.

There is an action in play on the Act card, and it will stay there throughout the whole act deck, that allows you to discard cards off the encounter deck. Choosing a location from those discarded you resolve it’s revelation effect, which basically puts it into play but may also cost you something along the way. The Agenda deck meanwhile hits you for being Forced to move, which is what Another Dimension, pay close attention, does. The circle is complete.

Initially you are stumbling through the twisted architecture of this other realm but once you have garnered a little understanding it becomes clear that you have a destination. Heading towards the Edge of the Universe you are looking to find a way back to the real world through a Tear through Time. If you can close the gate on the way back through the world will breathe a sigh of relief.

The Agenda deck is pushing the investigators to the edge, and I must admit I have not survived this particular scenario yet. The back of the first two Agenda cards refer to previous encounters throughout the campaign bringing back memories of the students you saved or didn’t and the people you saved from the Altar , in my case it was poor Peter Sylvestre, or didn’t. After that Yog-Sothoth himself turns up and must be defeated or you must escape through the Tear through Time.

This is the finale, the big showdown with whatever entity has been controlling the story so far from behind the scenes. The world is on a knife edge, and it shows through this scenario and in it’s fallout. Dealing well with earlier scenarios does help you along in this part of the arc, but you can still falter at the last, ending up trapped beyond the portal if you cannot find your way back through.

Apart from the existence of location cards in the encounter deck the rest is relatively straightforwards. Full of monsters and a few locked doors the encounter deck has always felt relentless to me, but in a way that is absolutely justifiable considering you are in Another Dimension, pay close attention. This is the culmination of all the hard work so far and it should feel fraught, difficult and frankly impossible to navigate.

The set specific to the scenario really rules the roost in this particular encounter deck because it is chock full of locations and is the biggest scenario specific set to date. In the end you are ultimately headed towards the Edge of the Universe and you need to establish a path in that direction. This is easier said then done as a lot of the locations that emerge can also vanish, or will force you to make them vanish for fear of advancing the Agenda. 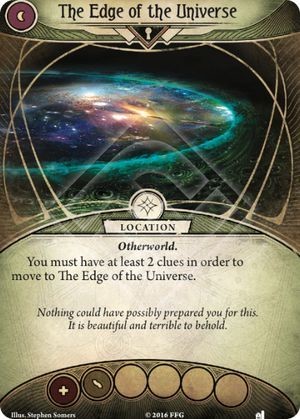 Lovely that an individual location can be this vast!

The Edge of the Universe has the moon symbol on it for purposes of travel, and only a couple of the Extradimensional locations that you appear will be able to lead you there. This gets fairly complicated as locations and paths vanish, so I really recommend having some path trackers or something like that, they have proved invaluable to me and my friends in a lot of scenarios. 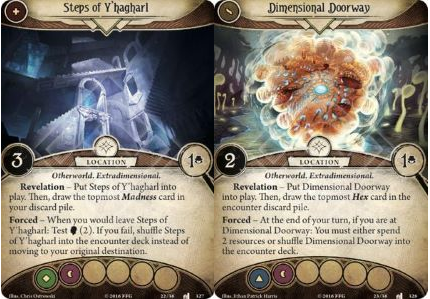 Although this is relatively straightforward chain of locations, the problems lie in keeping these things in place long enough to actually get there. Tear through Space builds doom, causing a risk reward relationship with the players as to how long they keep it around. Thankfully it is the most numerous location so they come and go fairly quickly. Prismatic Cascade is a clue pinata, but if you clear it, pop it goes and the endless bridge gains doom as you move off it, or you can wink it out of reality. Everytime a location disappears, in addition to any other effects, you are going to move back to Another Dimension, pay close attention, and take some horror from the Act card. Even the final locations before you get to the Endless Bridge might disappear if you don’t plan carefully.

This is the crux of the scenario and it is pretty difficult to balance the need to move quickly when a path appears, the need to hoover up clues and deal with reality constantly falling apart around your ears! Several of the non-location encounter cards are to do with the impossible architecture of what you are witnessing and having that fall apart or blow your mind.

And so we reach the end, and just before the year is out. Through dangers untold and hardships unnumbered you have fought your way to fight beyond space and time, beyond your reality, to come face to face with a god. You’ve helped or hindered gangsters, rescued, or not, professors and innocents, lost friends and defeated foes, coming to this final encounter with your sanity and body mostly intact.

Beyond Time and Space is a great finale to the first full campaign, showing that the team are happy to experiment with all sorts of game elements right up until the last moment of their story. The locations popping in and out of existence is so different to everything that has come before and gives a perfect feel of arriving in an unknown place with rules that you don’t understand and can barely comprehend.

The Arkham Horror LCG has impressed me from the off and my time spent with the Dunwich campaign has only left me hankering for more. I haven’t ‘won’ it yet, but that doesn’t matter, for in this game the play is the thing. The journey, not the destination is important and that is something reflected in the mechanics of the game right up until the last moment.

Although even I would admit that Dunwich is a little uneven, Miskatonic doesn’t quite fire and Undimensioned and Unseen feels like a it of a clumsy leveller, I have enjoyed my time running through it immensely, and I am currently playing a 3 hander as Mark Harrigan through that campaign.

Next, I venture behind the curtains of the play ‘The King in Yellow’ in the latest campaign ‘The Path to Carcosa‘. Spoilers: where Dunwich turns things up a bit, Carcosa pushes it all the way to 11.

Discuss this article
Log in to comment
Posts in discussion: Beyond the Veil - The Arkham Horror Card Game: Lost in Time and Space

DarthJoJo replied the topic: #301680 13 Sep 2019 00:17
Four full campaigns deep, and I still think this may be the best finale, only recently facing stiff competition from Circle Undone's Before the Black Throne. After months of random location selections and extensive setups, putting down just that one location and one encounter deck blew my mind. It really evokes that feeling of loss and confusion. Even knowing the scenario, you still don't know necessarily where to go or how you'll get there. Admittedly, it can be a swingy, as you might expect when the locations only appear randomly, but man, it is such a clean, simple, good premise. It's a great and fitting end to the campaign.

thegiantbrain replied the topic: #301716 14 Sep 2019 04:45
Yeah it really gives a feeling of confusion and being places beyond your understanding. I've failed at the last here and that can be a little frustrating. Eager to see if Return smooths out the variance in the scenario a bit or just doubles down.

DarthJoJo replied the topic: #301719 14 Sep 2019 08:23
If I remember right, Return does include some new locations that provide alternate paths and thus reduce chokepoints. My wife and I won, but I’m pretty sure we missed a major rule that would have had us facing Yog early, too.

thegiantbrain replied the topic: #301721 14 Sep 2019 10:11
Easy to do. The game does have those weird moments where you aren't sure whether something is meant to be working the way it does because the design team are messing with you, or someone just messed up.
Read More...