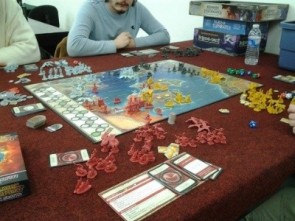 Last August I made a trade for Conquest of Nerath, the D&D-themed conquest game from Wizards of the Coast. For months it sat on my game shelf, mostly serving as a toy for my three-year-old son. It was hard to deny its appeal in that regard, but it wasn’t until just this last week that I was able to scare up the four people that so many have recommended. True to my expectations, I had a great time. I have a history of not caring much for dudes-on-a-map games, mostly because I’m kind of an impatient gamer. Conquest of Nerath didn’t disappoint in that regard; we were attacking each other immediately, swapping territories until one team hit the victory point threshhold that ended the game. There wasn’t a single mechanic I hadn’t seen elsewhere. I have played lots of games where you roll dice to conquer territory, and I’ve seen plenty of conquest games where you get victory points for your trouble. It was one of those situations where it wasn’t so much what the game did, but how well it did it. It was like watching a brilliant pianist performing a song that someone else wrote. The fact that it’s not original doesn’t diminish the performance.

For  being the biggest board game publisher in the world, most of Hasbro’s releases are dismissed by hobbyists. Even if you don’t hate Monopoly or Risk, you can at least pass by them without comment because everyone knows what they’re like. But that isn’t quite the case for Hasbro’s main hobbyist wing, Wizards of the Coast, the publisher of Magic: the Gathering. Between 1999 and 2006, they released a lot of well-regarded hobby games that faded out of print just before everyone realized how good they were. Then in 2010 we got Castle Ravenloft, which ended up being an opening salvo in a new round of hobby releases, mostly themed after the Dungeons & Dragons brand. Most of these games (which also includes Dungeon Command, a line I haven’t had opportunity to play) have been terrific, though perhaps not for the usual reasons. Rather than really advancing game design with new tricks, they’ve retreated to known mechanics and genres and been content to execute them really well. The results have been something whose specialness is only beginning to dawn on me.

I know not everyone shares this assessment. It’s not that the games haven’t been successful among hobbyists, because they definitely have. But from the reviews I’ve written and the conversations I’ve been party to, there are many whose response to the D&D games would be, “That’s it?” I pick that up from Lords of Waterdeep in particular, since it’s mostly just a D&D riff on one of the more stale Euro design trends, that of the worker-placement game. For my own part, it took a few tries before I really saw the greatness in the “Drizztshardaloft” cycle. I liked them fine, but they had to grow on me. And when I first reviewed Waterdeep back in 2012, I gave a mildly positive review. Of course by the end of the year it made my best-of list. Clearly there’s something to WotC’s game design philosophy, because now I feel like one of the biggest cheerleaders for the D&D Adventure System, Lords of Waterdeep, and Conquest of Nerath.

There are a few reasons for this success, I think. One is that as I get deeper into the hobby there’s something to be said for being easy to pick up and play. In the several months before I finally played Nerath, I read the rules several times in preparation for sessions that never materialized. When I finally sat down to teach the game to three other players, I was a little concerned that it might have a learning curve. I needn’t have worried. We spent all of 10 minutes on explanation, and aside from some finer points in the rules, we internalized everything very quickly. That included the individual unit powers, which is often something that can bog down the learning process. Wizards of the Coast has been great about using context that people understand to facilitate the games. One function of genre is to give us a framework for expectations, and in a hobby that is constantly defying genres it’s nice to have some games that are alright with being familiar. They strip away layers until what’s left is a concentrated shot of whatever that genre is. The stripped-down approach is sometimes enough to even push the games back into revolutionary territory. The Adventure System peeled away so many layers from the dungeon-crawl genre that it felt like an epiphany.

Another factor here has been the tactile pleasure  of just seeing these games on the table. The earlier Avalon Hill/Wizards of the Coast games from around the turn of the millennium varied wildly in quality. The 1999 version of Acquire is often regarded as the nicest edition, but games like Vegas Showdown definitely sacrificed some component quality to keep costs down. There have been no such issues with this current crop of D&D titles. The Adventure System has some of the finest minis in any game I own, and even the unadorned tiles and cards are solid quality. Lords of Waterdeep seems like the exception here, but it’s actually a really good production of a Eurogame , with great illustrations and some of the more ridiculous (in a good way) coins I’ve seen in a game. Neither of them hold a candle to Conquest of Nerath though. More than most games I’ve played, that’s one that turned some heads at game night. Tons of plastic units and a big colorful board made it look like the coolest game in the room. All of those ridiculous productions came at retail prices at least 25% cheaper than what any other publisher could offer.

But the biggest reason for the success might relate to something I’ve observed: these games work best with people who aren’t neck-deep in board gaming. That sure seems like it’s why some gamers don’t like them anyway. A lot of gamers find them to be simplistic, random, and more than a little derivative, but most people haven’t played these genres to death. This past Thanksgiving I got to play Castle Ravenloft and Wrath of Ashardalon with my brother-in-law, who enjoys roleplaying but doesn’t get to do much of it anymore. We had an absolute ball, some of the better game sessions I’ve had recently. It’s interesting to me that they function best when they aren’t played very seriously. C0nquest of Nerath is a big dumb action movie of a game, all fighting and dice-chucking. The Adventure System relies on a particularly capricious d20. And Waterdeep has a lot of screw-you interaction that frankly doesn’t care if its a little unfair. They’re casual games for casual situations, something of an introductory course to major genres. Maybe not something that everyone needs, but certainly something the hobby needs.

Hasbro has never been one to leave niche games in print for long. With a new edition of D&D on the way, I imagine they’ll want to clear the decks so they can rebrand the franchise. That means that these games won’t be around for a whole lot longer. If we learned anything from the first round of Hasbro/WotC hobby games, it’s that a lot of them will be missed when they’re gone. Don’t be surprised if these ones start fetching a pretty penny on the secondary market. They’re the kind of games that might just end up being heirlooms of a sort. I know I’ve already had terrific adventures with my son just playing with the pieces to Wrath of Ashardalon. I plan on doing that as long as I can, with him and with my friends.