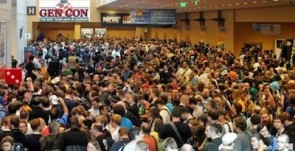 Ah, it’s that time of year again – GenCon week. You can smell the excitement in the air. For those of you who have not been here before, it smells like hair grease and buttcrack sweat. I freaking hate GenCon.

I know, right off the bat, I just lost half of you. Hold on, I’ll try to lose the other half.

Maybe it’s because I work the show. That might be it – but I don’t think so. My first year I wasn’t working, and I hated GenCon. The first year I just cruised around the hall for four days, then went out and drank at night. That doesn’t sound too bad, but it still sucked.

Or maybe it’s because my idea of the perfect vacation is not going to some almost-a-big-city suffering from a drastic loss of industry, sweating my ass off walking around the only town I know more humid than Orlando, sharing a hotel room with more guys than we have beds, and spending sixteen hours a day playing games. Call me crazy, but I would prefer a nice beach, some rolling surf, and complimentary margaritas. At the price I pay for a booth, it could probably be cheaper.

Or maybe it’s the nerds.

Until you stand in a hotel lobby, waiting to check in to your one-bed hotel room that you’ll share with three other guys, and overhear a woman who is very excited tell a man who is very excited that they’ll be making Halo armor in a workshop, and the woman’s friend is holding a lightsaber made out of an office light bulb, it’s tough to completely grasp how intensely nerdy GenCon really is.

Let’s start with the stink. It’s not as bad on Thursday, because many of the party animals who show up here bathed before they got on the plane. But by Sunday, you’re sitting in a crowded hall with people who have not washed their assholes since Lincoln was in office, and at times the smell can make your eyes water. You’ll be begging for a whiff of raw sewage.

Or how about the freaky son of a bitch who was throwing a tantrum at the check-in desk? Yes, this was a fine specimen – stringy black hair halfway down his back, a beard growing in random patches, and a lovely bald spot right on top. Add in a black t-shirt, black jeans, and a belly that juts outs over both, and I think I can tell you why he has to pay for sex.

While walking back from the garage where I parked my car (it’s about eight blocks from the convention hall, which means that most of the fat bastards who visit here would need a Careflight ambulance to take them to a Jack in the Box before they got halfway there), I saw a man who looked like 600 pounds of butter shoved into a pup tent. I saw a couple grown men wearing Yugioh shirts (they had gray hair and pony tails). I also saw two women dressed like they were serving wenches at Medieval Times – except they were in sneakers, and they were carrying plastic boxes full of toys.

And the show hasn’t even started yet! I’m really wondering what kind of oddities I’ll encounter for the next four days. Will I get to see a man in a corset again? Will there be old ladies wearing skirts that fail to hide underwear I could use as a parachute? Or will it be tame, and there are just going to be goofy throwbacks who live on Pocky sticks and Mountain Dew who think they’re really cool because they have a mohawk (which, incidentally, has not been cool since Mister T).

Look, I’m more than willing to admit that I’m a nerd. I have an extensive collection of Teenage Mutant Ninja Turtle toys, sixteen boxes of comic books, and more board games than some small towns. I like movies about superheroes. I can tell you the functional differences between Advanced D&D and 3rd Edition, and I’ve seen every episode of Firefly, twice.

But I am also a functional member of society. I know that even if I’m at a convention geared toward nerds, there is never an excuse for a dude to have hair past his kneecaps (well, there might be, but it mostly involves being stranded on an island with nothing but a lifetime supply of Pantene Pro-V). The only scenario I can imagine where I would tuck my t-shirt into my jeans and pull my pants up past my navel is if my pockets were full of water-activated piranhas and the tide was coming in. And you would have to club me over the head and dress me while I was unconscious before you’ll ever catch me wearing a pair of purple capri pants – but I’ll be damned if I didn’t see a cat with exactly that outfit today. His flaming red beard and shaggy hair might have said, ‘I’m a man who doesn’t own a mirror,’ but his pants are saying, ‘I dig hairy men.’

Being a nerd is fine, but it’s not a badge of honor. There’s nothing wrong with enjoying the stuff we enjoy – lightsabers, kung fu movies, and miniatures games are all awesome. I love ‘em. But you’re still part of the whole world, a country of people who work and drive and go to the grocery store, and when you tip the scales somewhere between ‘ginormous’ and ‘Shamu’, you should never, ever wear a bikini. Especially if you have a dick.

There’s nothing wrong with belonging to society as a whole. There’s no downside to being fit enough to jog a block or two. I’m not calling for a cessation of nerd activities, but would it kill you to take off the foam demon horns when you go out for a drink? And it may sound like I’m harping on the weight problem here, but let’s not dance around it – these people are fatter than normal. They are not healthy, either physically or emotionally, and yet they still wallow in their abnormality and wear it with pride.

At this point, I expect I have hurt some feelings. I am sure there are several readers who think I am a big mean bully who likes to mock freaks and fat people. Well, I might be mean, but that doesn’t mean I’m wrong. It just means that you have surrounded yourself with people who lie to you and tell you that being a complete aberrant is not bad for you. Nerd stuff can be awesome, but you need balance, and that’s what is missing at GenCon.

I have to be here four more days. I cannot pretend that I am looking forward to it. I have friends who plan and save all year, and this is their big annual vacation. More power to ‘em, but if I wasn’t getting paid to be here, you couldn’t drag me to this show with a team of magic unicorns lead by a strange woman selling Halo armor.