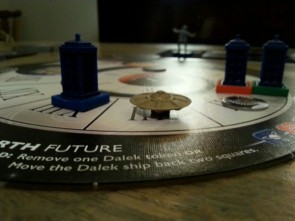 With the “upcoming” (things have always been a little “wibbly wobbly timey wimey” with the release dates of GaleForce 9's products) release of the Doctor Expansion packs for Doctor Who: Time of the Daleks, I reached out to Andrew Haught, designer of the title, to speak to him about the game, expansions, and all things “Whovian.”

Wade Monnig: How familiar were you with Doctor Who before you began working on the game?

Andrew Haught: I’m a long-time fan of the show. I started watching the show with my dad when I was a toddler, and have been watching it ever since.. I always dreamed of being able to work on an official Doctor Who game, and when I was 9 years old, I created my first Doctor Who board game. So, getting the opportunity to work on an official fully-licenced game with the Gale Force 9 team is a dream come true. Any one of my coworkers would tell you that Doctor Who is more of an obsession to me.

AH: If you force me to pick a favourite Doctor, I would have to say Peter Davison. The 5th Doctor resonated with me the most while growing up, so he has a special place in my heart. The 8th Doctor is a very close second because of the amazing work that Big Finish did.

WM: I loved the inclusion of Idris Tardis in the base game. How much leeway did you have in including characters that are not traditionally considered as “official companions?”

AH: I was able to choose who I wanted in the game quite freely (and carefully, of course!). After making my selection of characters for the game, BBC were quite thorough in considering my choices, ensuring that the game would do the service to the fans that it should.

Including the Idris Tardis in the game was a no-brainer for me because I’m a massive Neil Gaiman fan. I was over the moon when I heard that he was writing for my favourite show! Hearing the news was like getting the best of two worlds in one, and I just had to include a part of that episode in the game.

WM: The 8th Doctor, Paul McGann, only has the movie to officially draw from. It would seem you would be limited in the locations and companions you could add with him? I know he has an extensive catalog of Doctor Who Big Finish audio dramas and appeared in “The Night of the Doctor.” Were you able to pull from these?

AH: These discussions are currently under discussion with BBC, so I can’t really comment at this time.

WM: Every game seems to have “That One Rule Everyone Gets Wrong.” Has there been a rule in Time of the Daleks that everyone seems to mess up?

AH: There is a belief that when one Doctor successfully stops the Daleks by getting to Gallifrey first, the rest of the Doctors lose at that point. But this is not the case. As stated in the rules, there are three ways that all Doctors can lose, and only one way for all Doctors to win. So, getting to Gallifrey first is an honour as you won the game for all the Doctors, so it’s more like first and second place in that respect.

WM: Much has been made about the choice to reduce the number of included Doctors to hit a specific MSRP. Would you like to comment on that and the reaction fans had to the news?

AH: This was a marketing decision not a design decision, I get to have the fun part of designing the game and then left the rest of the process up to other people.One thing I don’t think players know is that when the game was resized, we didn’t just take out 1/3 of the game to put into an expansion and called the core game done. The game had to be re-designed and we ended up adding more content to the core game and the 5th and 10th Doctors’ expansion. So in the end, players getting the Core game and the first expansion will end up with even more content then they would have had if we released the original six player game.

WM: I love how Gale Force 9 has previously included alternate set-up and rules with their expansions. Can we expect the same with Doctor Who?

AH: Maybe down the line, but for the first few expansions we are mainly adding in material. In each expansion, you’ll get two new Doctors along with Companions cards, Timey-Wimey cards, Time Anomaly cards, Dilemmas, and Locations from their respective series. The expansions also give players what they need to play 5 or 6 player games. We have plans for bigger expansions after these first few expansions that will shake up the game and add more ways to play the game.

WM: How do you strike the sweet spot of difficulty when it comes to designing a cooperative game? Time of the Daleks includes a first game ruleset and cards that are specifically marked with a Dalek icon that can be removed from the initial play. Will this be carried forward in the expansions?

AH: It is a hard balance to hit; it takes a lot of playtesting to get it right.

WM: The game mechanisms intertwine beautifully with the Doctor Who theme. Such as using the companions to focus dice and using the Sonic Screwdriver to get out of sticky situations. Where there any game mechanism you considered but discarded because they didn’t feel like they belonged in Doctor Who?

AH: When I approach making a licenced game I tend to make lots of lists. In these lists, I write what I think the show is about and what aspects of the show resonated the most with me. From there I try to figure how to make those aspects into game mechanics. So there wasn’t anything that I would say got dropped because it didn’t fit the Doctor Who world, it's more that they weren’t considered because we started from the show and worked backwards into the game. Because of my design process, I actually had to scale some of the detail that I originally contemplated. I took “on-theme” rules out of the game because it made the it too clunky or complicated. For example, there was a version that required you to go to the particular place where a companion first joined the Doctor to get that companion, and there was no other way of getting a companion. This was an added complexity that just derailed the game. I changed the acquisition of a companion to the Linked mechanic, so that key places can still find particular companions and I also added a random companion element found in the game in its current state.

WM: If you had a TARDIS and could travel back in time, what would you change about Time of the Daleks?

AH: I’m pretty happy with how everything turned out, I think the finished product really embodies the spirit of the show.

WM: I don’t know if Shada could be considered an Easter Egg but seeing it included in the game, and a timey wimey card based on the mini-episode “Time Crash” in promotional pictures, they sure felt like a wink and a nod to Whovians. Do you have a particular favourite item or location that has been released or is in an upcoming expansion?

AH: It’s funny, I see where you are coming from, but I never thought of them as Easter Eggs, just nods to my favourite parts of the show, but that’s basically what Easter eggs are. I really focused on making the game I would want as a fan, and there are loads of references that I am looking forward to or have added. For example, in the core game, Ramona gains benefits for being with the 8th Doctor. This interaction is from the BF adventures.

As for future cards that I am excited about, I can’t really tell you everything at this point, but I will say I am a big fan of the “Bring me Knitting” card in the 8th Doctor Expansion. When Night of the Doctor Came out, I was working on the game , and I was watching that clip at work without any clue that Paul McGann was coming back for that bit. I totally geeked out at that moment, and that line was awesome.

WM: So far, you have worked on a Doctor Who game and a Firefly game. With two legendary franchises on your development list, what do you look forward to working on? Do you have a dream IP?

AH: To be honest Doctor Who is my dream IP, and I hope to get to make a few more Doctor Who games. There are loads of IPs that I would love to work on in the future and we have some really cool ones that I would love to make games for.One IP I am excited about working on is Aliens. It’s my current project so I can’t go into detail about it other than saying it’s a co-op game and is completely based on the second movie in the franchise.

Discuss this article
Log in to comment
Posts in discussion: Interview with Andrew Haught: Designer of Doctor Who: Time of the Daleks