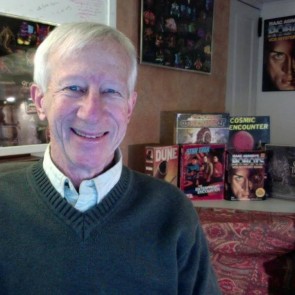 Designer
Peter Olotka
There Will Be Games

Peter Olotka has had a huge hand in shaping the board game hobby. Along with Jack Kittredge and Bill Eberle, he formed Future Pastimes, the design team that changed gaming in 1977 with the release of Cosmic Encounter. Two years later they again created a foundational work of sci-fi gaming, in their adaptation of Frank Herbert’s Dune. Other releases, such as Borderlands, Hoax, and Runes followed, making Future Pastimes and Eon Games among the most creative and influential board game designers in history.

With a long-awaited new edition of Dune returning to store shelves, I contacted Peter Olotka via e-mail to get his thoughts on the return of Dune, the impact of Cosmic Encounter, and how they figure into the legacy of science-fiction. This interview has been lightly edited for grammar and clarity.

N: For many years, Dune wasn’t available in its original licensed form. What can you tell us about the process of bringing the game back?

P: Jack Kittredge, Bill Eberle, and myself, designing as Future Pastimes, were reading Dune, and we thought it would be a good underpinning for a science-fiction game. We had published Cosmic Encounter and had a small amount of notoriety in board game circles since Cosmic was so “different.” We learned that Avalon Hill had secured the Dune license and called them to offer our services. They told us that the game was already being worked on by other designers, which seemed to be the end of the story.

But in a mystical turn we got a call a few weeks later from AH, telling us that the other design group’s game wasn’t what they wanted, and asking if we’d be interested in giving it a try. Jack had designed the simultaneous order-based dial system, and even though we had scant experience in licensing and contracts, he had the presence of mind to construct the 1979 Future Pastimes – Avalon Hill contract so as to license the unique game system that is the core of Dune.

In 1984 we designed two expansion sets, The Spice Harvest and The Duel, to coincide with the David Lynch Dune movie, which had lots of buzz heading into its release. We lobbied Avalon Hill to do a new release with a box cover that had a character who looked like Sting, which they did. Of course the movie bombed, and took the board game with it. Frank Herbert died in 1986, and within a few years the game was nowhere to be found. There’s enormous déjà vu, to again be releasing Dune to coincide with a pending movie with lots of buzz nearly 40 years later.

In 1998 Hasbro acquired Avalon Hill. Mike Grey, who was a Cosmic Encounter fan, was in charge of Hasbro’s Adventure Games department and wanted to republish Dune, as well as license Cosmic Encounter from us. The Herbert estate controlled the license for games for Dune and were not interested in republishing at that time. Hasbro did do an edition of Cosmic Encounter, which was not successful.

N: A lot of elements of Dune were ahead of their time, but others are very much from the 1970s. Players have to write down information, there’s some ambiguity in the original rules, and the length is as likely to be two hours as it is six. When you were working on bringing the game back, to what extent did you focus on making the game as close to its original form as possible, and in what ways did you feel updates were necessary?

P: The new rules were meticulously edited by Future Pastimes and Gale Force Nine. We took into account numerous fan-based additions and suggestions, and updated the graphics. Note that the original Dune had a few line drawings of the battle wheels and characters, and not much else.

We had an enormous contribution in rules savvy from Ian Allen of Seventh Son Games, to the point where he is cited in the new rulebook. We had never actually heard of Ian before this project. We were hard at work on the Dune reprint in April of 2019, and we were simultaneously organizing and running The First Annual Cosmic Encounter Galactic Tournament at the Museum of Science Fiction Escape Velocity Convention. We decided on a whim to pick the winner of our 2018 Cosmic Encounter Alien Towel Day Contest, a promotion we cooked up to play off of the Cosmic Encounter 42nd Anniversary Edition, “42” being the answer to life, the universe, and everything in The Hitchhiker’s Guide to the Galaxy. (Coincidentally was also 42 years old at the time!) Ian and I chatted on Facebook after he won, and I mentioned the Dune game. He then sent me a picture of his home-made Dune game using artwork from [BGG user] Illya. He was a dyed-in-the-wool Dune fanatic and played regularly with his gaming group.

Greg Olotka also designed a Dune Quick-Start Guide, packed with visuals, and even commentary from characters, comic-book style, to get new players into the experience in short order.

N: It’s been just over ten years since Cosmic Encounter was reprinted by Fantasy Flight Games, and it feels like it’s a bigger hit than it’s ever been.

When talking about the impact of Cosmic Encounter I’d like to mention Charles Hildenbrandt, our lawyer who helped handle the complexities of the Dune deal [with Gale Force Nine]. His favorite games are Dune and Cosmic Encounter. We met by chance in 2018, as I was trying to figure out how to get invited to the Museum of Science-Fiction’s Escape Velocity Convention in the DC area. Charles called me and told me that he became a fan at the age of 10 when he played Cosmic Encounter with me at Lunacon in NYC at the Eon Products Booth. He was attending with his father and his uncle, the Brothers Hildenbrandt, who designed the original Star Wars poster. Charles was raising funds to actually build the Museum of Science-Fiction. We agreed to support the MOSF effort, and Charles is handling the design agreements. That means for the first time in our design careers we have a professional intellectual properties lawyer.

John Paul Biscotti, head of Gale Force Nine, lives minutes away from Charles, and of course GF9 had the rights to Dune. We introduced them, and they got together to discuss their mutual admiration of Dune, and they have since been able to work out details of the agreement.

N: So is the intent for Cosmic Encounter and Dune to be part of an exhibit at the Museum of Science-Fiction?

P: Yes, there will be a science-fiction games exhibit. But the fundraising for the MOSF is still in its very beginning stages, so who knows when the project will come to fruition.

N: You seem to consider both Cosmic Encounter and Dune as being works of science-fiction as much as game designs. In both your own IP and in adapting the Dune IP, how do you feel those games capture the feel of sci-fi in the 1970s and 1980s?

P: What’s interesting to me is that science-fiction was for us mainly literature. Star Wars came after Cosmic Encounter, and the Dune movie came out after the board game. In terms of influence I think Star Trek was a prime one, where alien life forms included more than just warlike creatures and the episodes always included humor. Today’s science-fiction is dominated by massive uncreative violence and dystopian futures. Nothing is funny, and to me, none of it is fun.

N: In what ways do you feel the games of Future Pastimes are relevant to the hobby today? Is their success just a sign of the general growth in the hobby?

P: Well, when we designed the line of Eon Products and Dune (which was outside of Eon), each game brought its own unique characteristics. As a design team we always laid down the marker that our games had to be different. We always strive to get at the heart of a core interaction among players, and then find ways to express ongoing interactions and outcomes. We don’t play very many other games.

N: Share with me a little about Wordsmith and Decipher. These both use the same Letter Piece system that you originally released in the Eon game Runes. What was it like to revisit Runes as a design?

P: As you said, Wordsmith and Decipher both use the Letter Piece system, deconstructing the entire alphabet into four component parts: big curves, little curves, small straights, and large straights. We published Runes in 1981, and it was also published in Germany in the 1990s. It was seen as a unique approach to word game, and we have worked with the talented designers at HeidelBAR Games to create two games that use the same system in very different ways. In Wordsmith the players are all forming words competitively, while Decipher uses the same system for a game of deduction.

N: What’s your favorite faction to play in Dune?

P: I don’t really have a favorite. I like to play the characters and take actions I feel might be how that faction would behave—which is not always the most obvious game-based strategic move. If other players are playing without regard to off-beat moves, then my moves can lead to unexpected situations.

Discuss this article
Log in to comment
Posts in discussion: An Interview with Peter Olotka, Designer of Dune and Cosmic Encounter

I loved that too. Almost too perfect!

KingPut replied the topic: #301613 10 Sep 2019 18:45
I love Peter Olotka’s last answer about what his favorite side is to play. We played Dune last week and there was a lot joking and table talk about role playing the factions. Harkonnen seems the easiest but we need to buy a hover chair.
Read More...