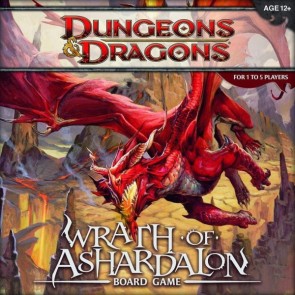 Wrath of Ashardalon the second game in a series of Dungeon & Dragons board games relased by Wizards of the Coast in 2010 - 2011. The first one, Castle Ravenloft, caused quite a stir. It was a D & D fully cooperative dungeon crawl that didn't a Dungeon Master. It had a simple, yet effective, AI and a highy accessible rule set. Wizards of the Coast followed up with Wrath of Ashardelon, which included campaign rules, in Febuary of 2011; and finally Legend of Drizzt in October of 2011.

We have since seen many more fully cooperative dungeon crawls published, from Space Cadets: Away Missions to Dungeon Degenerates. With so many to choose from, has Wrath of Ashardalon fallen by the wayside, or is it still played?

So what do you think? Do you love it or hate it? Do you still play it?

Discuss this article
Log in to comment
Posts in discussion: Flashback Friday - Wrath of Ashardalon - Love it or Hate It? Do you Still Play It?

I could have got a lot of play out of this, but with Ravenloft, Drizzt, Temple of Elemental Evil and now Tomb of Annihilation as well it's just massive overkill. The much vaunted crossover between sets never really came to anything in practice and the games are too similar.

So you might as well pick one and squeeze all the playtime you can out of it, rather than spreading the love and being unsatisfied with a whole bunch of near-identical titles. If I was going to pick one, though, it'd be this over all the others just for its old-school flavour and simple campaign rules.

Michael Barnes replied the topic: #282732 05 Oct 2018 08:37
Temple of Elemental Evil and Tomb of Annihilation obsoleted this, Ravenloft, and Drizzt. There are virtually zero compelling arguments to play this over the two newest titles in the series as the latest is the greatest. The minor changes are actually big improvements. It really kind of sucks tgat the changes are very difficult to apply retroactively.

I’ve actually gutted my older games in this series. Lots of the minis are Frostgrave wandering monsters now.

Good point on the figures though. These boxes are stonking value for money if you want basic but functional fantasy miniatures for pretty much anything at all.

I agree that WotC never fully realized the integration between these titles. It wouldn't have been hard....the fan work for Ravenloft and Ashardalon is fantastic.

I guess it's simply a changing of the times. For the kids in our house Ravenloft, Keeps on Borderlands, Temple of Elemental Evils aren't really fantasy places to game as they were for me. Silver Towers, Shadespire, NightVault, Hammerhal...that's where heroics take place.

Josh Look replied the topic: #282738 05 Oct 2018 09:22
I’ve never liked this entry in the series as much as others. Those sentry dudes that keep calling more dudes, possibly more sentries? Completely annoying, and not in the fun, “Hey, this is a challenge!” kind of way. I never played the newer games because they’re so reliant on campaign structure, something the hobby desperately needs to see go extinct.

On top of all this, I can think of at least 3 other dungeon crawls I’d rather play over any DDAS game.

Josh Look wrote: I never played the newer games because they’re so reliant on campaign structure, something the hobby desperately needs to see go extinct.

Totally agreed on this point. I've never understood the hobby's obsession with campaigns.

I just broke this game out last week to play with my son, although it had been a while since we played it last. We had a blast. The game ran a little long (my son tends to play VERY cautiously, which makes for slow going). We got to the final chamber and drew the Rage Drake. All our best attacks were used up, no healing surges left, and maybe 1 or 2 hit points each, so it was looking pretty grim. Thankfully, the quirks of the tile draw had created this sort of loop with a wall running down the center. We ran that poor Rage Drake around in circles while peppering it with ranged attacks, staying just out of its attack range, and squeaked out a victory.

Somehow, this game almost always delivers a tense, close final battle. I do wish the artwork on the tiles and cards was a bit more evocative, but that's a minor complaint. Some guy on the internet used to sell individual components from all these games, so I've managed to cobble together all the parts needed for Ravenloft and Drizzt, so I'm set for life on content. I've never played either of the new games in the series.

san il defanso replied the topic: #282745 05 Oct 2018 10:14
I played the first three games a lot with my group in Michigan, and I ended up bundling them all together in a big plastic storage tub to take them on the move. I have basically used them for minis in my Tomb of Annihilation campaign. I like these games a lot still, and they have been a hit with my kids.

These still fill a niche for me. An hour long, dead simple, no campaign to futz with (amen to that, Josh), these are dungeon crawls that I need in my life. Still really like them, I should crack them out again soon. Ashardalon is my favorite one too, so I'd totally be up for that one.

But sadly it was always a run and avoid as much as possible type of game. That flies in the face of what I see a dungeon crawl being, especially with D&D attached to it.

It's more a game of punishment and avoiding the harshest bits for a phyrric victory.

The argument that they are the ultimate sandbox only holds so much water to me. It's nice that I can buy these for a relatively cheap sum in order to get the minis and throw the rest away, yet that makes for a sad product as published.

Ken B. replied the topic: #282748 05 Oct 2018 10:51
Personally, I think a conversation about these games would be better when taken as a group rather than any individual title in the series.

I really enjoy these games and admire their design. We were basically given a Heroquest-style easy to play D&D game with procedurally generated content. A true co-op that did not require a DM, so everyone could have fun and no one had to worry about the balance of playing a DM as trying to win vs. making sure everyone had a good time. These came during an era where we did not have a large selection of amazing new dungeon crawl games. The fact that this came out from the Hasbro umbrella--a fully, all-in-the-box hobbyist smorgasbord of goodies--makes it all the more fantastic.

I have the first three games in the series and I don't feel the need for more of them. But they've succeeded with kids AND with hobbyists. They're crisp, full of action, and play in just over an hour. That's also insane for a game of this style.


I would not own these as my *only* dungeon crawl game. They do, in fact, have their limitations on many levels, limitations that are inherent to the design goals, being honest. But I'll be damned if I ever sell mine (life-altering disaster notwithstanding.)

Jackwraith replied the topic: #282752 05 Oct 2018 11:15
Never played it. Played Drizzt and Ravenloft once each and ended them feeling kind of "Meh." I think my experience was more like Crayons', where it seemed the optimal strategy was "avoid and survive", rather than "engage and conquer." Also, I don't have the attachment to Ravenloft and Drizzt that a lot of othesr here might have. The latter was right around the tail end of my involvement with D&D, so it never became a thing for me. Strangely, my attachment to Assault of the Giants is precisely because it's set in the Forgotten Realms and the fond memories I have of that setting. Drizzt was always a bit external to that whole picture, from my perspective. But since I'm witheringly old school, I'd probably enjoy Temple and Tomb more than any of those three just for the mem'ries, aside from any mechanical or component improvements.

Honestly, I'd be totally into a Desert of Desolation game, if anyone ever made one.

Jackwraith wrote: the optimal strategy was "avoid and survive", rather than "engage and conquer."

This is the optimal strategy in most D&D role-playing games I've played. Hack-n-slash is more in the domain of video game rpg's.

Jackwraith wrote: the optimal strategy was "avoid and survive", rather than "engage and conquer."

This is the optimal strategy in most D&D role-playing games I've played. Hack-n-slash is more in the domain of video game rpg's.

I've only played 1st & 2nd edition AD&D, so maybe the strategies have changed since that time.

But this was not our experience unless necessary. Beholders, drow, gelatinous cubes, mind flayers, wraiths, and other foes who being in direct conflict with was the quickest way to an early grave, should be avoided.

But avoiding conflict in general in a dungeon? I find that assertion spurious.

Half the monsters in these DDAS games should and would be easily defeated by a capable exploring party in the RPG.

[Edit]
That's not to say that making a skeleton more challenging is a bad thing. I think it's great TBH. But there is just far to much feeling that these are games of "Run the gauntlet". Far too sadistic. Like having Player killer DM's delighting in your masochistic hope of having a good time eventually in their dungeon.

Josh Look wrote: They’re resource management games when you get down to it. I think I was ok with that when they first came out, not sure I can say that I am now.

In that regard almost all dungeon crawls are resource management games. Managing your hit points, the items you start with, the items you find along the way. If some or all of you run out of that most precious resource (HP), it's game over.

Josh Look wrote: They’re resource management games when you get down to it. I think I was ok with that when they first came out, not sure I can say that I am now.

In that regard almost all dungeon crawls are resource management games. Managing your hit points, the items you start with, the items you find along the way. If some or all of you run out of that most precious resource (HP), it's game over.

That’s true, and if I’m being honest with myself, it’s not one of my favorite genres for that reason.

I think the bigger issue with the DDAS games is that they’re the kind of co-ops where it’s all punishment and little reward. They ask the player, “How long can your resources hold out while we repeatedly kick you in the dick?”

Pat II replied the topic: #283056 14 Oct 2018 10:38
These are fun, short games. The newer titles add more needed bits to the game however the miniarure quality is racing for the bottom of a toilet. They're still serviceable but noticeably smaller. I've had a lot of fun with these over the years mashing them together and we still keep selling them at the store I work at.
Read More...