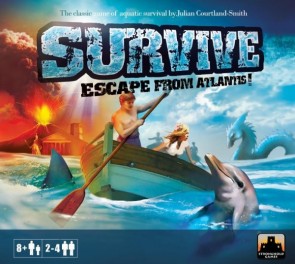 Game Name
Survive: Escape from Atlantis
Publisher
Stronghold Games
There Will Be Games

In 2011, Stronghold Games announced that they were re-printing the old family favorite Suvive!. And there was much rejoicing!  There is always much enthusiasm when a new edition of a long out of print game from our childhood is released, but once the nostalgia wears off, do those games actually have any staying power?

Did the nostalgia wear off for you? Or did the re-print of Survive! survive? What do you think of the expansions? Survive: Space Attack!? The 30th Anniversary Edition?

Discuss this article
Log in to comment
Posts in discussion: Flashback Friday - Survive: Escape from Atlantis! - Love it or Hate It? Do you Still Play It?

hotseatgames replied the topic: #288145 14 Dec 2018 11:30
I still think this game is great, but I don't often get a chance to play it. I only ever got the extra player expansion. I do have one criticism on the components; mine came with stickers for the value of each meeple, and those do NOT stay on. Easily remedied, but still annoying.

Michael Barnes replied the topic: #288147 14 Dec 2018 11:47
Absolute best of the best. Play it frequently. Always fun. Have never touched any of the expansions. I’ve had every major version of this including Escape from Atlantis. The only one that sucks was the original reprint, it looked HORRIBLE. The more recent 30th edition version looks great. I got mine at a Goodwill. It was new in shrink and everything inside was fine but the box was massively damaged- it looks like a shark bit it. So naturally, it has character.

Space Attack is great. It adds a little complexity and some pew-pew, making it slightly more aggressive. It’s really kind of underrated...and our very own Geoff Engelstein did the additional design on it. My son likes it better than the original.

See, the thing is, it sounds great. It ought to work. But in practice, for me at least, it's a great game without a niche. It's a casual game that's no good for casual play because it's so mean. And if you want to play it with the mean crowd, I'd rather have a game with a bit more depth or a bit less play time.

I imagine all my value stickers have fallen off in the years since it last saw the table.

charlest wrote: I really like this game, but my group never is too enthusiastic about it. Waiting for my daughter to get old enough.

Yep. This, exactly. I love this game. I think it's a slick design and does exactly what it says on the tin. But my group could just never get into it, so I traded it. I've never tried any of the expansions or Space Attack, etc.

Vysetron replied the topic: #288156 14 Dec 2018 12:24
We have Space Attack on the forever shelf. Subtle, strong changes in that version. It's one of my wife's favorite games and while I don't hold it quite as high it absolutely sings with a mean table. Got our copy signed by Geoff, Sydney, and some dude named Buonocore at DTC.

Josh Look replied the topic: #288164 14 Dec 2018 14:50
The yardstick by which I measure all family games. Still love it, will always say yes to playing it. I wouldn’t go as far as to say it’s my favorite game of all time, but no game in my collection is more special nor has more great memories associated with it.

It is the only game whose track record is 100% among every player I have introduced it to.

It is evergreen. Timeless.

Those who spurn Survive are philistines who should be stoned and ostracized for their heresy.

RobertB replied the topic: #288169 14 Dec 2018 17:05
I like it. My family gamers won't play it because it's too cutthroat. My daughter's friends won't play it for the same reason. They have no problem whatsoever with lying their asses off playing something like Coup or One Night Ultimate Werewolf, but steering a shark over their player makes them upset.

This has been a hit with the family for years, and for some reason my more serious gaming group recently got into it, so if anything its seeing the table more now than it did back in 2011.

I played it thirty years ago with a new friend I had just met (our mother were BFFs in high school, and when they reconnected - our age and interests were a commonality). That friend and I still hang out every Thursday night, albeit blowing shit up on Xbox Live.

Anyway, I got a copy of that old game from thirty years ago at the Goodwill five months ago. Four bucks. It has so much more character than Stronghold's pathetic first crack at college freshmen graphic design. Visuals criticized, I still own my Stronghold copy and it's two expansions. It gets regular play.

All I'm saying is when I remove a whale from the board? It's because I'm playing a Tile that's printed in English stating, "Harpoon a Whale."

And deep down, I'd like to lay my hands on a copy of that Plastic Fantastic version that Waddington's Games published.

I own several versions of the game. My personal favorite is the international Waddington's with the GORGEOUS plastic pieces - amazing sea serpent, cool little building on the hex tiles, etc.

However, I really like the ATLANTEAN SWIRLER, so I own that version and the boats and wooden minis in the other version is great too.

However, I DO NOT like the Stronghold reprint. I think the art and components are cheap looking and terrible compared to the amazing art of the other editions.

I have yet to try the space version, although I'm turned off by the lame looking art.

Colorcrayons replied the topic: #288200 14 Dec 2018 19:57
I still have my Waddingtons version of Escape from Atlantis. I covet it, despite it being fiddly as all hell without being magnetized.

I had to hunt down a few more tiles so that I could play it as the Survive. But I made some cards as a replacement effect to the tiles which allows me to play it as Survive without interpreting the bullshit iconography.

san il defanso replied the topic: #288210 14 Dec 2018 21:37
I like it, but don't love it. It gets the most use when playing with kids and teenagers, mine included. My younger son isn't much into games, but he will play this one. The level of aggression makes sense to kids, if not always to gamers.

For my part, I think the swing in point values on the little people is too swingy. I feel like it's a little too easy to win on accident, particularly with inexperienced groups. It's a fun design though, very intuitive and interactive. I would personally call it a second tier classic.

NeonPeon replied the topic: #288213 14 Dec 2018 22:49
Fun game but never caught on with my group. I have the Waddington's set and added weights to the bottom of the Atlantean pieces so that they're actually stable, as well as point values printed underneath. I even made up an event deck though I only tried it once - boardgamegeek.com/thread/402067/totally-...y-variant-event-deck

All in all I probably put too much effort into modding my set for the amount of time I played it.