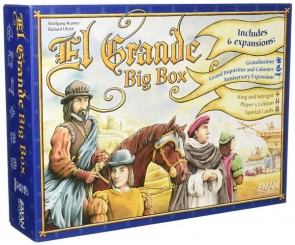 “It’s hard to overstate the significance of El Grande’s publication. It basically established a new kind of board game, one in which players strove to have the majority of pieces in different geographical areas of the board.”  - Larry Levy

It's been almost 25 years since El Grande was published. It won the Spiel des Jahres in 1996. It is still in print and has sold over half a million copies. But mostly it is know as the game with the cube tower.

Discuss this article
Log in to comment
Posts in discussion: Flashback Friday - El Grande - Love it or hate it? Do you still play it?

davebliz replied the topic: #291825 08 Feb 2019 02:23
Oh yes I still play El Grande whenever I have a chance. I remember I wasn't too impressed with the base game, felt it was too random with the event cards showing up BUT when they added the Konig & Intrigant expansion, it became a classic. You got a lot more control over what was happening.

Sagrilarus replied the topic: #291829 08 Feb 2019 07:12
I just played it this past Monday and it is still exquisite. With five players there is nothing to compare with it. The base game is all you need.

Jexik replied the topic: #291833 08 Feb 2019 08:03
In 1995 I was still playing Battle Masters and then repurposing the figs for WHFB, so I missed out on this when it was new. But, I did get a chance to play it about a year ago based on all the praise here, and it did not disappoint. I'd gladly play it again.

southernman replied the topic: #291835 08 Feb 2019 08:11
I played it in the early 2000s when 'German' games were the thing (and yes, they are different to the 'euros' that followed for the next 15 years) but then all the FFG and similar AT/thematic games starting coming out mid-2000s onwards and I have never played it since. I remember it being pretty good but I doubt I would play it in place of anything else in my top 100 these days, if it was on the table when I arrived I would play it though even if just to see how it (or I) had aged/evolved. The tower was pretty cool back then.

Shellhead replied the topic: #291838 08 Feb 2019 08:18
I have only played El Grande once, back around '99. It is a mechanically sound game that is almost entirely divorced from any sense of theme or setting. So I find it too dry to be enjoyable, and there is nothing to talk about once the game is over.

Michael Barnes replied the topic: #291841 08 Feb 2019 08:29
One of a very select few perfect games- still a masterpiece, and it is the first game I Reach for when I’ve got a table of five. I bought the game first in 1996- it was one of those really early Rio Grande releases where they just put an inkjet sticker on the German box and shrink-wrapped some printed out English translations onto it. I did go through a period where I thought it was “dry”, but it is yet another German game where coming back to it with fresh eyes revealed how timeless it is.

Dave, that is the first time I think I’ve heard anyone say that it needs the expansion! I have had the Decennial Edition since it came out and I still have never once played with the additions.

I like pronouncing every province with a noticeable lisp

Black Barney wrote: I like the sound the captains make when they get dropped in the Castillo

I like pronouncing every province with a noticeable lisp

Legomancer replied the topic: #291848 08 Feb 2019 09:01
Absolutely love this game and it irks me that the version I have is the newest "Big Box" version with its meeples instead of cubes, crappy castillo, and useless expansions. Plus, because it's "big box" the box is even bigger than it needs to be, making it a pain in the ass to tote around. I'd love to trade it for an older version.

I have only played El Grande once or twice, and enjoyed it. I might have bought it if it were available, but all that you can find here is the big box at the hundred dollar mark.

I own El Caballero because I found it in a bargain bin. The tile placement aspect of it is appealing to me and ties in really well with the area control aspects. And boy is the game mean. There's a lot to it. I think I wrote about it in the "what are you playing" thread, but I think if this game had meeples or cubes instead of the kind of rotating tiles, (i recognise you'd lose one of the tactical aspects of it though, but, just saying), it would be a lot more well regarded.

ubarose replied the topic: #291935 08 Feb 2019 22:16
Does anyone else here remember when El Grande was only avalible in German?Distribution in the US amounted to slapping a typed up copy of the rules on plain white paper on the outside of the box, wrapping it in a second layer of plastic and then putting a sticker on it.

And then, the first time you played it, trying to make sense of this really strange new sort of game, convinced that the translation of the rules must be wrong.

san il defanso replied the topic: #291936 08 Feb 2019 22:47
So funny story about that. My wife bought me a copy of El Grande when we were still dating. She found a guy on BGG selling it, and ordered it for me. But when it arrived it turns out that it was actually in German. I had to go online to Funagain and order a set of English cards. Until they arrived we played holding a photocopy of the English rules to decipher the German cards.

That's actually what it's been for a while now. I've had it on one of my lists on Amazon for a year or two. It started at $70 but it's been hovering around the high 50s for at least the past year. I've never pulled the trigger on it for some reason or another. I've played it (and liked it), but don't own a copy. I really shouldn't spend more on games right now...

Erik Twice replied the topic: #292028 10 Feb 2019 08:43
I played it once or twice. It was cool, though it didn't grab me in a "wow, I should play this a lot" manner. And that's something very interesting about it: Nobody hates it. Nobody thinks it's a bad game or that there's something wrong with it. If you look it up in BGG, the lowest scores are in the 6s range. That's really something!

What surprised me the most is that it's a very chaotic game! Very un-euro like.

But still clamor to play it? In the world where Chaos in the Old World exists? Nah... this pretty good game has been long since fired

Frohike replied the topic: #292309 14 Feb 2019 17:18
I picked up the redundantly titled El Grande Big Box and the game was very popular with the family & extended family. It fits right into the style of games that we prefer, most of which are in this "(Mean) German Family Game" vein. It's way more chaotic than we were expecting, but this was also a good thing.

This is also the first game where I've been tempted to break down the box and reconstruct it into something smaller since all of the components take up roughly a third of the actual space.

I played it once about five years ago. It was ... fine. Nothing wrong with it but it had a stuck-in-time feeling, not a timeless one. Like listening to an oldies station.

WadeMonnig replied the topic: #306833 03 Feb 2020 22:55
The king and intrigue expansion looks promising. My
Daughter loves the base but the wife found it dry... as
She still managed to beat me by one point.
Read More...