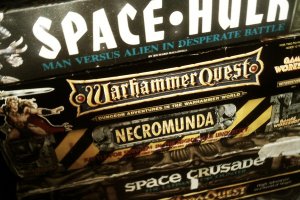 It’s that time of year again when I head on over to boardgamegeek and compile the average game ratings of everyone that’s bought an Ameritrash Fan badge and make a top fifty chart. In some ways it’s a meaningless excercise in number crunching but I know of no better way of capturing the zeitgeist of the Ameritrash community: certainly the “thematic games” domain on TOS falls woefully short. And people seem to love it, so I keep on churning out the stats year after year.

In case you’re new to this, here’s the rules. Only the ratings of people with an Ameritrash Fan microbadge count, and only games that have at least 30 ratings make the list. Beyond that it’s just a standard average of the ratings. Only the base game counts, although for games that have particularly interesting expansion ratings I’ve commented in the list. And for games with more than one version or edition only the highest-ranking one is counted.

This is the fifth year running I’ve done this, and some all-time classics are in danger of dropping off the list for good. So I thought I’d do something new this year to commemorate them for the future. Games now have “gold” or “silver” status. Silver means they’ve made the top fifty for five years or more. Gold means they’ve made the top 25 for five years or more. In future years I’ll be recording and remembering games that have earned these awards but vanished from the list, so new gamers won’t forget them. And it’ll be a while before any golds drop off the list, but gold status is a sign that anyone on this site should play the game, sharpish, if they hadn’t done so already, as they’re the creme de la creme of the genre.

So without further ado on with the list. I’ve not commented on every entry as some need no explanation.

These two games were partly my inspiration behind instituting the awards, to ensure that these once-revered classics were not forgotten. Although since Descent is due to see a flash new edition sometime this year it’ll be interested to see if interest is revived in next years’ chart. The favourite Descent expansion is no longer Road to Legend, possibly because of playability issues, but is now Tomb of Ice with 8.17.

Given the fanfare that was accorded to this game in various end-of-year awards shows it’s somewhat surprising to find it languishing down at forty seventh spot. I have no good explanations.

45 Fury of Dracula - SILVER - Average rating 7.75 - down 16
Little disappointed to find that one of my all time favourites only made silver. But then again my preferred version is the Games Workshop edition which didn’t even make the list!

A surprise new entry for this relatively old (2008) game about which I know very little. Cool miniatures though.

Been wondering if we’d ever see this famously monstrous and thematic, if dry game on here. Have to see if it sticks around.

This is the biggest drop on the entire list. I’m not surprised: co-operative games seem to be going out of fashion somewhat, and this was just a straight re-skinning of Pandemic.

Released last year but it’s take a while to gain sufficient traction to penetrate this list. It’s a favourite of a lot of F:AT readers but the badge rankings are not the same demographic - it’ll be interested to see if this can hold its place.

Not one I enjoyed particularly but a proven track record on the list. I’ll be glad to see it gone, not least because the ridiculously long name always screws up the formatting.

Some people’s very definition of Ameritrash, a spanking new edition has bought this old dinosaur onto the list for the first time.

Yes folks, it’s the first time it’s been on the list. I suspect previous releases and expansions and suchlike were a bit scatter-gun to meet the criteria. Now we’ve got the master set material is consolidated somewhat and I expect to see this here for a while to come.

Every year this has been on the list I’ve wondered how enough people have been able to find and play a copy in order to rate it. Now I’m wondering how enough people managed to do it to push it up a respectable six places! Here’s hoping Fantasy Flight’s acquisition of the Star Wars licence means a new edition might be in the works!

Much like King of Tokyo, end-of-year frenzy over this might have made you think it’d come in higher. Especially seeing as ….

… this little discussed and occasionally derided new game pipped it in the rankings.

Yes folks, only silver for Arkham Horror - two places higher and it’d have made gold. Let’s hope it makes the places back next year and gets the shiny slot it deserves. The highest rated big-box expansion was Innsmouth horror with a big 8.63, and the highest rated small-box was King i Yellow with a respectable 8.08.

Yet another one you might have expected to see higher. And there’s plenty more new entries to come.

Our first gold recipient is in fact a war game!

A very noteworthy entry this. It’s the only bona fide, unarguably full-blooded Eurogame to have gained an award of either colour (based on its previous incarnation as Railroad Tycoon). It’s also the highest climber at a whopping 19 places on a list where constant new entries mean that old favourites usually fall. Boosted no doubt by some cracking expansions, this is nevertheless without a doubt the favourite Euro of the Ameritrash crowd.

All the fuss about the Halifax Hammer doesn’t seem to have made much of an impact on opinions of this game in this demographic.

The only serious challenger to Railways of Europe as best Euro from the list is currently ahead of it, but dropping. Will it stick around to take the crown next year? I reckon it might.

Only silver for this long time favourite, as early entries were harmed by its relative scarcity. But will it make gold before it drops out of the top 25? The favourite of the slew of expansions is Cosmic Incursion with a huge score of 8.83.

Passed me by somewhat, but it good showing for this new co-operative game.

The stats for Dominion are odd because of all the variant editions. Prosperity is the current favourite but taken as a whole this is, shockingly, not far off getting a gold award! Only you, brave readers, can stop that from happening by voting down this pile of theme-less garbage and its ilk. Get to it!

Once the number one game on this list, Dune has fallen slightly out of favour, but not so far as to not qualify for a gold award.

Holding very well all by itself, but the sometimes maligned Horned Rat expansion scores a whopping 8.97 from Ameritrash badge holders.

I already highlighted that climbing is fairly rare for games on this list. Blood Bowl is, I think, the only one to have managed it every single year. Boosted this time I suspect by the release of Team Manager, the original has nevertheless left its younger sibling trailing a long way behind in its wake.

A high new entry for a favourite of the previous year. Whilst daring I’m not sure this has that much longevity compared with other CDGs - time will tell.

A mere ninth place for one of the big stories from the wrap of 2011. And there are not one, but two more new entries yet to come. Can you guess what they are yet?

Many may have deemed Eclpise the slayer of this venerable and much-loved gold award game, but for now the ratings say the majority think differently. As ever the famous Shattered Empires expansion gets an average score that *ahem* eclipses everything on the list, 9.05. And the little-discussed Shards of the Throne expansion isn’t far behind with an 8.93 average.

Respect to this for being the biggest climber in the top ten.

Here’s the other big news game of 2011. The ratings suggest that the majority agree with Micheal Barnes that it’s better than Eclipse. But it’s still not the highest new entry!

Down three for this former number one but still holding steady in the top five. Exodus is the favoured expansion with a good 8.48 average.

One of only two games to have been in the top five in every iteration of the list.

So who saw this coming? Didn’t win many awards. Has been on Tanga. Not discussed much except by die-hard fans but ultimately loved by all those who’ve tried it. It’s the highest new entry and claims the number two spot by a considerable margin over Space Hulk. I just wish we could have Tanga over here in the UK so I could have afforded a copy.

So there’s the list. A couple of things I wanted to highlight. First is the number of small or non movers in the top ten. We’re really hitting some consistency now is terms of taste in games and that’s nice to see. Second is the relatively poor showing of a number of last years’ popular titles. Some of this is down to the fact that the cream of the crop last year didn’t put in an appearance until December and so missed some award lists, but nevertheless I think it casts doubt on the frequently made assertion that 2011 was such a bumper year in terms of quality. According to these ratings, on the whole older games are still preferred.

See you next year!