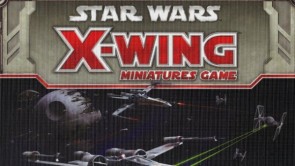 Those of your who’ve been with us for the long haul will remember the amount of words I used to lavish on getting people to play their games. All the dire warnings against acquiring another identikit cube pusher when so many gamers already don’t play the ones they have. Part of me still wants to believe that. In reality, the piles of hardly-touched games and expansions tottering out of shelves and cupboards all over my house say otherwise.

It was X-Wing that started this, because it was the first game I’d seen that made me want to own it just on the strength of how it looked. There are other games with fantastic design and production: Napoleon’s Triumph and Claustrophobia are prime examples. Yet I would never encourage a gamer to own any other game on the strength of how it looks alone.

X-Wing was different. X-Wing spoke to the long dormant miniatures gamer in me. The gamer that used to rejoice in seeing three thousand points of intricately painted Warhammer figures dueling it out on the table, supported by cunningly crafted scenery. Those little ships. Those simple, yet realistic paint jobs. How could I not love them?

So the piles of figures started to grow. Originally I promised I’d stick to designs that were in the movies I remembered as a child, but then an HWK-90 and a Tie Defender turned up at bargain prices, and I was unable to resist. I tried hard to get them all on the table, and succeeded. But I’d be lying if I said that some of the less successful models, like the TIE Bomber, were every likely to see play time again. Still I kept them, carefully ensconced in foam, because they were beautiful. And the towers of foam stacked up, and up.

They say the road to hell is paved with good intentions. So it was that the next nail started out with a premise to keep true to my original promise. If I focussed on expansions, I reasoned, I could get more play out of the games I already owned while still enjoying the process of acquisition. This realisation sparked another buried facet, a march toward completest tendencies.

What I’d foolishly failed to realise was just how many expansions some of my favourite games had. The Commands and Colours games are by far the worst offenders. Napoleonics has four, Ancients has six and there are small islands in the Pacific with insufficient landmass to hold all the Memoir ’44 expansions. In buying them, I was just making a rod for my own back.

At some point among this madness I had to admit defeat. I could not, in all good conscience, tell people to play what they had before collecting more any longer. And in doing so, I found a kind of peace. All those boxes on the shelves stopped nagging me. There were still practical considerations, of course. A small house can only hold so many games. But it changed the way I viewed my games. Instead of millstones, weighing me down with the knowledge that there would always be more games than time, they became more like old friends.

Human beings have a desire for nostalgia, for keepsakes. There’s not a person alive who doesn’t have a little collection of memorabilia from important times and places. If, as gamers, some of those important times and places revolve around gaming, what’s so odd about wanting to keep the games that spawned them? Even if they weren’t played enough, or you doubt you’ll ever play them again.

Hope is the great enemy of good sense. Hope is what’s behind people accumulating unplayed games, thinking that one day, one special day, they might see the table again. Yet for all that it can lead us astray, it can also be a precious thing. There’s a certain pleasure to knowing that if, one day, I or a friend, or a family member wants to learn more about the Scottish Wars of Independence I can pull down Hammer of the Scots and say “here. Play this”. I’ve played it over twenty times, and I’m done with it. But if ever I should want it again, it’s there.

Maybe it’s just because I’m getting older, and I’m finding it harder to let go of the things that defined my past. Perhaps I’m just becoming that little more resistant to change. It comes to us all in the end. I’m sorry if I ever made anyone feel bad about collecting games. In truth, I still think it’s better to be a player than a collector. It’s just that I finally have to admit that I don’t have the strength to live up to that ideal any more. Games are lovely. I want to keep them in my life.

If you enjoyed this piece and would like to see more opinion, reviews and analysis from the author, please consider backing him on Patreon. Every dollar helps.

Legomancer replied the topic: #201086 20 Apr 2015 09:16
On BGG someone posted a thread about Free Comic Book Day and phrased it as, "I know some of you collect comics", which cheesed me off. I replied, "please describe it as 'read' comics instead of 'collect'" and suddenly I had people crawling out the woodwork to sell me IT IS SO COLLECT BECAUSE I DON'T THROW THEM AWAY AFTERWARDS.

For a while now I've boiled against nerds and their "collections". I know people with collections. I know how they work. Buying whatever is in front of you and then sticking it on a shelf isn't a collection, that's just buying shit and putting it on a shelf. I've certainly done that -- and worse. For a while I was buying the new Star Wars figures, but all I did was buy them, take em out of the package, put them in a case I kept them in, and that's it. When I move to MA I moved several such cases, which sat unopened for years, still packed for moving. What's even the point of that? (I also had ones that were still in the package, not to increase their "value" but because I didn't even care enough to do that.) I purged all of that junk a few years ago.

I have no problem with people buying whatever they want, even if that kind of consumption doesn't do much for me anymore. But don't try and present yourself as some kind of curator, putting together a finely honed collection. You're just buying shit and giving yourself excuses to buy more shit. We (many of us, at least) live in America, and you don't need to justify consumerism; it's what we're built solely for.

Matt Thrower replied the topic: #201093 20 Apr 2015 10:25
I don't think you can compare acquiring games to displaying figures. A big part of what makes me reluctant to part with certain games is the thought they might get played again one day. It's not an idle fancy either - there have been several games I've almost sold and ended up being glad I kept. Keeping something for no purpose is one thing - keeping something you could realistically enjoy again in future is another.

SuperflyPete replied the topic: #201095 20 Apr 2015 10:43
I think you can. I know several people who are very proud of their "Wall of Games", laid out with precision, alphabetized, and with many still in, and in perpetuity will remain, shrink-wrapped. I'm not smart enough to tell others how to live, or what's right or wrong. I don't get it, but it's not for me to get. It makes them happy, and while I think they're missing the point, as you do, it is what it is.

I think the real point of your post is really more about the collection of CMG stuff, though, and I'm not sure that they're much more than beanie babies. People buy 3x every pack to "have options" (read: feed into their need to consume, and not feel left out) just like I did with Heroscape. The intentions were noble, but in retrospect, it was driven by the fear that if I didn' t buy them at retail, I'd want them down the road and they'd be 10x the price on eBay. Part of that has been proven out because the Heroscape secondary market is fucking INSANE, and has been for years, but realistically, although I've played with all the models I've ever bought, human nature is such that I always gravitated toward a very small, non-representative sampling. It's always two kinds of army builds, ranged and melee, for me. And it's always the same kinds of models for me. The tournaments really helped market the shit very slyly, too - unsurprising as one of the designers and many of the playtesters on the Hasbro team were one in the same when putting together the tournament structures. They literally had so much variation in the tournament rules between the various and sundry tournaments at GenCon that you really kind of had to buy it all to be able to play in them all, which is what a lot of people did.

I get what you're saying, though, and I agree with the idea that consuming to consume is a disease of sorts. What I disagree with is the idea that our playing of games and their collecting of games, when viewed objectively, are two different animals and playing is superior. People do what they do for no apparent reason, and our enjoyment in playing may very well be just as rich and rewarding to us as collecting and just "looking at" is to them. Who's to say?
Read More...