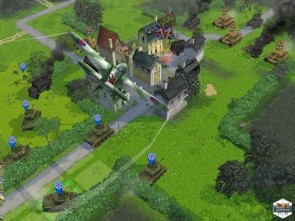 In a curious co-incidence, just as I was bemoaning a lack of proper wargames on the iPad, the wonderfully named Slitherine Software (apparently a subsidiary of the well-known digital wargames studio Matrix Games) released Battle Academy for the iPad. Eliciting howls of outrage over its $20 price tag, Matrix were good enough to give me a download code so I give you all the straight dope on whether or not the game is worth the money.

Battle Academy (oddly tagged with the BBC logo, as the game is a refinement and extension of a originally a flash effort that played on the BBC website) is a World War 2 tactical game in which you’ll command a mixture of armoured vehicles, artillery pieces and squads of troops in a wide variety of missions. The system and interface are smoothly intuitive but hide a wealth of tactical detail: after the very short mission campaign you’ll pretty much be ready to roll, although there is online documentation to read through if you so wish. There are one or two commands and effects that aren’t covered anywhere, but brief experimentation will sort these out in short order. However, the interface at times seems almost too slick: once you’re used to things are are tapping all over the place to select and order units, it’s easy to unintentionally order the wrong unit or send something to the wrong place. Care is needed.

So it’s a good job that care is something the game teaches you, often in hard and gruesome lessons. Gamers who are used to the sorts of strategy and tactics games where you can assemble an enormous force and steamroller over the opposition are in for a shock here. Nothing is safe: your tanks can, and will, be knocked out by enemy armour or anti-tank guns or infantry hidden in buildings with horrible, insouciant ease. You’ll soon learn to rain down artillery on any terrain feature that looks remotely capable of concealing enemy troops and wish you had more to call on. As an allied commander you’ll live in dread of German heavy armour like Tiger tanks which are pretty much invulnerable head-on to anything you can throw at them aside from your biggest guns. You’ll curse as puny mortar fire causes cowardly Sherman pilots to retreat, and cheer when you finally hunt the bastards down and flush them out of their fortifications. There’s a lot to think about, good combined arms tactics are necessary and realistically modelled, and ill-considered action is often punished badly by a reasonably capable AI: it seems not to know what to do with cornered units other than drive them pointlessly back and forth and seems to attach an oddly low priority to capturing victory flags over preserving its units or attacking yours, but otherwise it’ll try fairly complex tricks like outflanking you, and using cover to sneak infantry up close to your armoured columns for a deadly assault.

Partly due to that decent AI, the missions on offer are somewhat more variable than the usual mixture of head-on assaults that I’ve encountered in previous tactical games. There are a lot of aggressive actions, naturally, but also defensive ones, meeting engagements, delaying actions, ambushes and others. The missions are spread across three historical campaigns included in the package, plus several options for randomly generating a stand alone scenario. Although the individual missions are generally very well designed, I was a little disappointed that there wasn’t a more overarching sense of history or narrative. Each battle you fight is presented without any specific historical context beyond the theatre in which you’re fighting, and is completely divorced from your last battle: you don’t even have to beat the previous battle in a campaign to unlock a scenario - all are available right away. Personally, in games like this, I love the sense of commanding and improving a cohesive force that you take from battle to battle, watching as they gain experience and morale from green trainees into a crack fighting force. It adds so much to the sense of personal involvement, of genuine sadness when you lose a unit and genuine pleasure when you triumph. But that sort of campaign isn’t available here. Perhaps, given the realistic level of carnage you can expect in each fight, it wasn’t entirely workable.

And nevertheless, the game still manages to offer you stories and heroics. Battles are a crucible in which tiny champions step up to the plate and small legends are forged. The British six-pound gun that stood alone after the other defences had collapsed, accounting for a dozen enemy tanks as a sea of armour swarmed about it before it was finally overwhelmed. The desperate, tense rush of an armoured spearhead needing to capture one more victory flag to win in the dying turns of a battle, its vehicles being destroyed one by one before a motley squad of infantry runs the gauntlet of fire and makes the space at the last possible moment. The feeble three-man scout team, cowering in a bunker but spotted by a passing Panzer that survive the initial salvo only to turn around and blow up their aggressor. These are the wonderful moments from which gaming myths are made, and Battle Academy offers them to you in spades.

Battle Academy also features an interesting innovation in terms of community. Asynchronous play is here, implemented well and a welcome feature to keep value in the game once you’ve beaten the campaigns, but what’s new is that it’s not just iOS based. There are versions of Battle Academy out on a variety of platforms (including PC for those of you who don't have an iPad) and the owner of one can play against gamers running on any of them, guaranteeing you a variety of opponents should you need them. And if you balk at paying the $10 for in-app purchase of an additional campaign well, fear not, because the good folk at Slitherine also maintain a quality-checked library of user generated scenarios and short campaigns that you can download and play for free.

What we haven’t talked about yet, of course, is the price. I have to admit I was pretty much floored when I first saw that $20/£14 price tag and assumed no-one would pay it and that however good it was, however much of a shame it might be, the game would sink without trace. Thankfully that hasn’t happened, and if you look you’ll see that Battle Academy is not entirely alone. Spiderweb Software’s epic role-playing games, the famous bullet shooters from Cave and other titles besides command prices in a similar bracket. And what I hadn’t realised at first, and what Battle Academy has taught me is that there’s a reason for this. Lost in the sea of simple physics puzzlers and repetitive jump-and-run games, people like me who use iOS as their main gaming platform are apt to forget that a lot of mainstream video games are not like that. They’re complex, demanding, exciting, rich experiences which are capable of holding your attention for many hours on end, demanding practice and skill whilst enveloping you in an immersive story. Games like that cost time, and money to make that their more stripped-down brethren do not, time and money that must ultimately be passed down to you, the consumer. Battle Academy is such a game, a real game, a proper game and not a little software toy to waste your time with. I have to thank Slitherine for reminding me of that. And is it worth the price? Yes, it is.