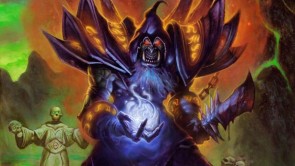 An alternative Cubelock that doesn't feel quite as awful.

When the game first launched, Hearthstone was officially "Hearthstone: Heroes of Warcraft." I think the partial intent was to keep the game in the high fantasy setting of the World of Warcraft and keep people from constantly asking for Raynor and Deckard Cain cards. The subtitle was dropped, but most players know that the game remains rooted in the Warcraft universe. I played WoW for a number of years and my main was a Tauren Enhancement (later Resto/Enhance) Shaman. There was a dual appeal both to the Tauren culture, based on Native American tribes, with its obvious serenity and deep attachment to the environment/elementals (Elemental being the other kind of Shaman) and to the concept of Enhancement, which was basically "be in tune with the elements while beating the shit out of people with a couple of cesti." However, my first character in the game and one I came back to often was an Orc Warlock. The dark side of the Force has always appealed to me (my favorite armies in 40K were Dark Eldar and Chaos; in Warhammer Fantasy, Skaven and Chaos) and the Warlocks reminded me of the darker Orc Shamans from the Warcraft RTS series. But just like with one of my other favorite classes, Warlock has often been saddled with subpar minions (Succubus) and an awful mechanic (Discard.) The demon aspect has changed a lot in the last couple years, but it was still the case until Knights that if you were playing Control/Handlock, you were focusing on giants, and if you were playing Zoo, you were playing mostly key neutral minions after the prerequisite Flame Imp/Voidwalker start. The appearance of Bloodreaver Gul'dan in Knights changed that somewhat, but what really transformed it was Kobolds and the now omnipresent Voidlord.

​
When Cubelock first appeared, I was all: "Cool! Demons with a purpose!" But it was still kind of a combo-y thing, which has never been a deck type that appealed to me. I don't want to execute one big turn. I want to have fun over several turns. So when Druid decks became rampant earlier in Witchwood (you know... three weeks ago) when they remembered that Hadronox is a Beast and can be fetched with what was thought to be one of the worst cards in Witchwood (Witching Hour), Druid Taunt/Armor decks began flooding the meta, not least because they ruin the day of your average Cubelock deck. Your 5 Doomguards do jack-all to 7 Taunts, especially once he clears your board and, in the process, resummons those 7 Taunts. Life Tapped a bit too much? Yeah. That's too bad.

Noted streamer Kripparian got frustrated with both Paladin aggro and the Druid decks and so decided to make a variation of Cubelock that focused not on Doomguard, but on Despicable Dreadlord. In the same manner, it really doesn't matter how many Taunts you put in front of 5 Dreadlords. I'll be chipping away at your face until no more Hadronoxes (Hadronoxen?) can appear. This deck was feasible in Kobolds, of course, but one of the cards that I think made it a reality is one of my favorite cards of the new set: Ratcatcher. He's the Void Terror that's actually worth the three mana. He only kills one minion when he enters, but he only has to kill one, generally. Cube, Ratcatcher: 6/8 Rusher and now two more Dreadlords, in addition to whatever else is on the board. The (ahem) impact can be huge. Another key card is Umbra, which has been around since Un'Goro and has appeared in various Cubelock lists before, but really shines here with Voodoo Doll for hard removal. Ratcatcher, of course, is also brilliant with Doll.

Here's the list if you want to try it out:

Unfortunately for this guy, I knew he was dead the moment he played the quest. What deck of tiny minions is going to survive the Despicable onslaught? I got an awful draw, having to dump both Mortal Coils and a Spellstone at inopportune moments just to maintain some kind of tempo. He silenced a Lackey-drawn Voidlord and also killed my Umbra that I'd also played for tempo and got no use out of. I also missed three damage by thinking of Godfrey as a Defile when I played him. So thing were not going well when he Stitched for a Toxmonger, played Carnassa, Death Gripped my Rin, and then "Well Played" me because he thought it was over. He got greedy and double Frenzied a Boar and it was over because I played Gul'dan who brought in the two Dreadlords I'd lost, plus the usual Voidlords/Walkers. You know what two Dreadlords do to an entire board of 3/2s and 2/2s? Yeah. With both Cubes and a Pact in hand, soon it was three Dreadlords...

So I think it can handle aggro, but the next game was the target audience: https://hsreplay.net/replay/PcpgnxYxHyNwZjvcrKt8Xf

That's exactly how the deck is supposed to work against Druids. I was a little surprised when the Whispering Woods came out, since he'd just seen me play a Dreadlord with a Lackey in play, but he was probably working on tempo issues, too. Turn 9 sees the Despicable Barbershop doing their thing and right through a subsequent Plague. Plus BGH! It's been a year or so since that card was a regular option, but it's not a bad thought, all things considered. He conceded as I sat there with an embarrassment of power cards in my hand.

So, it's a fun deck and, as Kripp notes in his video, only kinda makes you feel dirty for playing Cubelock. Try it out before the impending nerfs justifiably end the Warlock reign of terror.

Marc has been into Hearthstone since the second week of the closed beta and still hasn't bothered to get to Legend. You can find him occasionally tweeting, sometimes ranting about politics, but mostly writing here at There Will Be Games. If you're so inclined, please feel free to support the site at the link at the bottom of the page and/or the writer.

stormseeker75 replied the topic: #273409 16 May 2018 08:29
You guys should have the bio section at the bottom in italics or something so it stands out from the rest of the article.

Jackwraith replied the topic: #273411 16 May 2018 08:49
As it happens, I was just changing that. We're trying out a system where I'm submitting these by email, which limits the formatting. I'm going to see if I can find a good way to simply place them right on the site, so that neither Matt or I are burdened with trying to catch up afterwards.

stormseeker75 replied the topic: #273425 16 May 2018 11:55
Excellent. Your writing was great. I don't play hardly any Hearthstone anymore and I was still able to follow the narrative.

Jackwraith replied the topic: #273426 16 May 2018 12:27
Thanks, man. I appreciate it. You should give the game a try again. The last two expansions have released with a ton of solo content, so you don't have to worry about keeping up with the people around you and can just play all kinds of cards from throughout the game's history.
Read More...