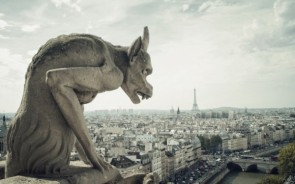 That's a statue joke, get it? See, they're usually made of stone and can't fly... Nevermind. Cathedral Gargoyle was one of the more hyped cards for Paladin in The Witchwood, but either it just isn't going to measure up in Standard or the meta will have to change quite a bit.

People raved about it on CompetitiveHS and I was roundly criticized and, of course, downvoted for suggesting that the card might not be all that. After all, you look at it and you can see that it's basically just a larger version of Righteous Protector and, not only that, but a conditional Protector. You get nothing but a vanilla 2/2 if you don't have a dragon in hand. That's not to demean Protector, which has been one of Paladin's most played cards in all archetypes since Knights. But you can play Protector on turn 1 and get the benefits (something having to hit it twice before it dies nobly) no matter what's in your hand. Gargoyle is a bit more complicated. Anyway, I assumed that everyone else must be tuned into something obvious and I decided I'd make a deck to see what I was missing.


Now, why would one base an entire deck around a not overly-impressive 2-cost 2/2? I dunno. I just did it because so many people were convinced that Gargoyle was a THING for Paladins in this set. Of course, the three utterly dominant decks for Paladin in the current meta are Even, Odd, and Murloc, all of which use almost no Witchwood cards, other than the requisite Genn or Baku. In fact, the current version of Even uses no Witchwood cards except Genn and the current version of Murloc uses only Nightmare Amalgam. But we'll talk about that more later. 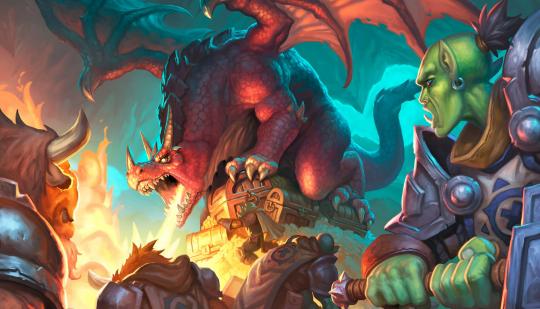 So, like many Paladin decks (i.e. all but Odd), you kind of have to base the early game around the best card in the game: Call to Arms. That's why Righteous Protector, Dire Wolf, and Loot Hoarder are all present, as they've been standard since Kobolds introduced Call. The downside in this situation- and people strenuously argued that this was OK on CompetitiveHS -is that Gargoyle is dependent on its Battlecry, which doesn't occur if he's pulled with Call. That means that you could potentially hit turn 4 and pull 2 vanilla 2/2s (one mana cheaper than a Grey Ogre (and just as useless) to you long-timer MTG people) along with another random minion and get nothing out of it other than pulling 6/6 in stats across three minions for 4 mana, which is still really good, but hardly mindblowing. Their argument was that on the turns you did play it from hand, it would make up for all the other times that you pulled it with Call. Remember, you've based your whole deck around having other minions that activate this minion and now you don't even get the expected value of this minion on a regular basis, to say nothing of already having to meet a condition to get that value in the first place. Does this sound wise? 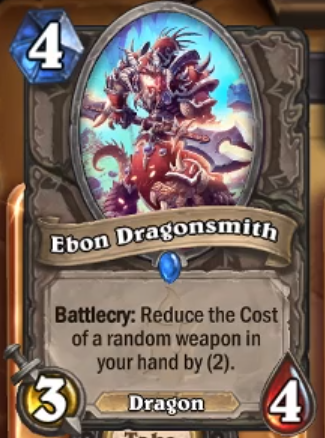 ​
This is a higher end Midrange deck, bordering on Control, which is why certain elements are present (Djinn, Alex, Paragon) but it's designed, like most dragon/tribe decks, to control the board with minions, which means it lacks the famous Equality combos that every Control Paladin deck since the Beta has contained. It's also designed to help control the board with weapons, which is why the Ebon Dragonsmith is present, since it's a dragon to activate Gargoyle and perhaps help you get your Silver Sword or Val'anyr in play sooner. There are 7 dragons (Amalgam, Ebon, Cobalt, Alex), which should be enough to activate the Gargoyle (standard thought in Priest decks is 6.) There are multiple ways to make the Paragon worth it (Bells, Dire Wolf, Maul (1 in 4), Sword, Cobalt, Val.) There's weapon removal that also doubles as draw and a bigger body in the midgame, since there's only Hoarders otherwise; a weakness in all but Paladin aggro decks, which still have access to the often stupidly efficient Divine Favor. There are multiple healing methods (Djinn, Truesilver, activated Paragon, Alex) which are necessary since you'll be doing a fair amount of removal with your face. And there's Tarim because he's Tarim.

I played seven games with it and went 3-4. The first was against Quest Hunter:

I'm pretty sure he suffered simply from the continuous mediocrity that is Quest Hunter. Not all the 1-cost 3/2s in the world will save you from Hellfire, Duskbreaker, or even Paladin's second-tier Consecration. I actually played two Gargs from hand and got to see them function in all their splendor but I can't say they were instrumental, especially since I never went below 23 life. I won simply by having a board and Alexing him.

Next was Taunt Druid: https://hsreplay.net/replay/dAqiMfaj8Q8zJW9tPWCoDh

which was going to be problematic from the start (again, no Equality.) Interestingly, despite having a Garg and a dragon in hand on turns 3 and 4, the better play still seemed to be Coin-Call and then Call, since Call to Arms is still the best card in the game. There's an argument to be made that putting up the defense of a bubble Gargoyle to protect your successive Calls might be the wiser way to go, especially for a near-Control deck. (I was also playing Ooze instead of Harrison in an earlier version, but I decided that I wanted to be sure to hold my weapon removal for Skulls, rather than see it pulled by Call.) Hadronox into double-Pathed Taunts was an inevitable loss, although you can argue that playing more minions to whittle him down, rather than the fell swoop of Alex might have turned out differently. But all he needed was a Naturalize and I was doomed.

However, the next game was also Taunt Druid: https://hsreplay.net/replay/tmchjpNgFdaNtCAXJBoa9Y

He seemed to be having trouble with his draw. Mine started slowly but the interesting point to me was when he played Ironwood Golem (from hand, no less) and it was clear that the proper play on turn 4 wasn't Ebon Dragonsmith, but instead one of the cards he should be enhancing: Truesilver Champion. Perhaps a small insight into why Ebon sees no play in Constructed and not much more in Arena. He ended up conceding in the face of double Cobalt.

The next 4 games were a loss to Control Priest when he Screamed me twice (I have little way to recover from that, given the slow nature of the deck and the lack of draw) and then Mind Blasted me for 1000 or whatever; a win over Odd Hunter, the player of which didn't seem to get the whole "shoot on even turns" concept; a loss to Spiteful Priest, again, after being Screamed; and then finally a loss to Secret Hunter when I started with the 3 most expensive cards in my deck in my opening hand and could never get moving.

​
The Gargs came in with their Battlecry functioning pretty often, so there are enough dragons in the deck. But the Gargs themselves are as underwhelming as I expected, especially given that Paladin currently lacks any dragons at all, to say nothing of them being on the order of Duskbreaker. Most of the neutral dragons aren't really exciting, either. Again, the Gargoyle does essentially what Protector does (i.e. takes two hits and dies), but costs 1 more mana and has a condition. It might have been more compelling with Rallying Blade and/or Dragon Consort and perhaps it was intended to be a Wild card, but if so that means it's effectively just dust to me, since I don't play Wild.

Admittedly, the deck could be significantly tweaked. The Val'anyr is kind of a conceit and the Mauls may or may not be out of place in a non-aggro deck which, nevertheless, is still largely minon-based. It might have been unfair to try to test the Paragons along with the Gargoyles, but in a deck oriented toward controlling the board, the two cards both seemed to serve the purpose. I just think that the Gargoyle isn't viable until some really competitive dragons appear in Paladin. Maybe in a few weeks (i.e. post-nerfs), I'll reformulate it and try again.


Marc has been into Hearthstone since the second week of the closed beta and still hasn't bothered to get to Legend. You can find him occasionally tweeting, sometimes ranting about politics, but mostly writing here at There Will Be Games. If you're so inclined, please feel free to support the site at the link at the bottom of the page and/or the writer
(end)