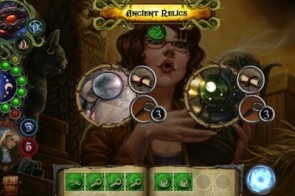 The most significant development in the world of hobby gaming over the last five years has been the arrival of iOS and mobile platforms as a vehicle for hobby titles. It didn’t take long for classics like The Settlers of Catan and Carcassonne to get a port to a mobile An iPad makes it simple to play against other people from around the world. Those of us who don’t use an iPad have fewer options, however. When I got a Kindle Fire for my birthday this year, I found that my mobile board game options were sadly limited. They’re getting better though, and Elder Sign: Omens makes a good case for putting more games on tablets. It’s slick, engaging, and expertly executed, and perfectly suited to the mobile environment.

Elder Sign: Omens is essentially a miniaturization of Fantasy Flight’s popular Arkham Horror. Like that game, investigators travel around the board and try to face challenges to keep an ancient evil from awakening. Here the action is localized to a museum, and each investigator can visit one location on their turn to try to defeat the challenges there. You roll the dice once, and if you can meet what one challenge requires you spend the appropriate dice and roll again to try for the next challenge. If you can’t, you need to toss one of the dice (here called “glyphs”) and try again with fewer dice to roll. If you succeed you get rewards, and if you fail you get punished a little. The rewards are mostly reroll tokens, extra dice, and a way to save good rolls. But you might also be given an elder sign, which will allow you to win the game if you collect enough of them. There’s another track, the doom track, that ends the game if it fills up. It strongly resembles Arkham Horror in its basic conventions, but it is far simpler. A full game can usually be played in about 30-40 minutes for me.

You may remember the original Elder Sign from 2011. I never did get around to the physical edition, mostly because the response at the time was only mildly positive. A lot of people complained about a somewhat buggy ruleset in particular. I’ve heard a rumor that Elder Sign was basically a beta version of the app that I’ve actually played, and that wouldn’t surprise me a bit. I expect that the game would be just a little too fussy for its own good in person. There would  be a lot of tracks and tokens to shuffle around. Not that it’d be complicated exactly, just complicated enough to keep me from setting it up and explaining it with simpler games around.

But obviously in a mobile setting those hurdles are completely gone. You won’t forget rules, miss a token, or have to poke the next guy to take his turn. The fact that the game is cooperative helps immensely as well. I’ve long suspected that co-ops are at their best in a setting like this, because they are some of the best solo experiences in their physical form. Removing the barrier of actual setup can only help, especially on a platform like Kindle Fire where other players aren’t really an option.

When all of the annoyances of setup and teardown are removed, what’s left is a surprisingly robust game. Most co-op games are a puzzle at heart, and it’s rewarding to see how best to put together a team of investigators and use their abilities to their fullest. The fact that it revolves around dice puts it right in my comfort zone, since dice are the most reliable way to provide challenge in a cooperative setting. My favorite moments are those when you MUST take a big risk to win the game, which happens quite a bit. I find myself thrilled when I have to roll a specific thing to pass the challenge with my last die, and I’m able to do so. Stuff like that makes for the most memorable sessions.

It’s definitely a more abstract experience than Arkham Horror. There’s no good thematic reason why a character couldn’t conjure the glyphs they need at a given time. It’s just a way to make the game more mechanically interesting. The abstractness might be a bigger problem in person, but the app can use music, sound, and graphics to make up a lot of atmosphere. It helps that it’s a well-produced app as well. Once you’ve internalized the rules through a good tutorial, the interface and layout proves intuitive. The only hurdle is really learning the rules in the first place, and FFG has done all they can to make that as simple as possible. The end result is that I have actually soured a little on Arkham Horror as a physical product, since Elder Sign: Omens does so well as a solo game without requiring me to spend 45 minutes setting up a game that takes up my entire dining room table and requires me to keep a flowchart handy to play it. It makes me wish that Arkham Horror existed in a similar format, because that’s a game that could benefit from a computer running it.

Once you’ve played 15-20 games, you might start to notice a little sameness from game to game. I actually put it down for a while because of this, but it all changed when I picked up the expansions, available as in-app purchases. There are three available, though I’ve just played the first two. They represent new Ancient Ones to face, but they are all new formats for the game as well. I’ve played both the Cthulu and Ithaqua missions. These are actually multi-stage scenarios that alter the format of the game considerably to provide a lot more scope and atmosphere. There are also some new investigators and locations for use with the other scenarios. It’s just the kind of expansion that FFG has always loved, new everything and an alternate way to play. Once again, the platform makes this much less trouble than it would be in real life. I would consider both of the expansions I’ve gotten to be essential, and I’ll pick up that third one once I’ve played these ones out.

I don’t have nearly the experience with mobile board games that many have. Heck, this game came out over a year ago and I only just got to it recently. But it’s easily the best I’ve seen so far. It really does feel tailor-made for mobile devices, and it reaffirms to me that FFG is a pretty sharp design house, especially when there’s a computer to hide the seams. Despite a more abstracted design, the atmosphere makes it an engrossing experience, one that has seen more play than any other mobile board game. Who would have thought that one of the best Fantasy Flight titles in recent years isn’t even a physical game?

hotseatgames replied the topic: #214301 06 Nov 2015 08:19
It is a great iOS version. There are three big advantages that the physical version has:
- you actually get to roll dice
- you can see all of the potential tasks at once
- you can more easily play with other people

I have not tried the expansions for the app but would like to get them some day.

san il defanso replied the topic: #214311 06 Nov 2015 09:04
This is still the best board game app I've played, and the expansions are really great. I do think they are difficult enough that you can only win if you get lucky, but the game is pretty open about the difficulty.

Play Yahtzee!! instead or have a really good wank.

I told him to give it to me as that shit doesn't phase me.