Since last Fall, there's been something of a gold rush on iTunes, with large and small software development shops seeking fortune by selling applications at price points between $0.99 and $9.99.  This gold rush is aided by the low cost of entry to the market.  The software tools required to develop applications for the platform are available free of charge from Apple, and access to iTunes costs a developer only $99. As a result, there are plenty of games available to users of iPhone and iPod Touch, but the lion's share are amateur efforts, facile puzzle games, or quickie ports of established titles.

Sadly, the iTunes interface isn't much help in distinguishing the worthy games from the chaff.  What follows are capsule reviews of three recent ports to the iPhone platform. 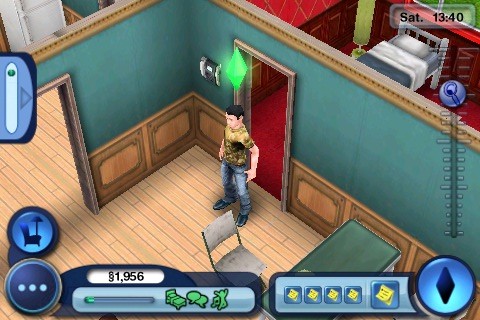 I'd tried some past incarnation of The Sims on PC, but I never played it extensively, so I thought this recent iPhone release would be a nice opportunity to explore the game. At $9.99, this item is at the high end of what you'd expect to pay for an application on iTunes, and I'm not sure it's worth it. Your sim's world is populated with just 14 characters, and there appear to be only four career paths to pursue. The game includes 73 unlockable achievements ranging from "Kick over a trash can" to "Get married."  Marriage in the iSims' world, though, is a curious condition; if there's a way to cohabit with your simulated spouse, I have yet to find it. As well, I assume that all the sims in this version of the game are infertile. The stork doesn't visit your iPhone, and these sims never seem to have babies.

A half-hearted effort was made to integrate the iPhone's accelerometer into the game interface by introducing a number of activities that are, in effect, minigames. For example, your sim can sustain herself by catching fish from the lake in the city park. To catch a fish, you need to tilt the iPhone until your hook is near the fish's mouth, then jerk the device upward when the fish takes the bait. This isn't particularly challenging, and it quickly becomes tedious. There are similar minigames involving cooking (you have to stir saucepans, lest they overheat and burn your sim's dinner), and appliance repair (drag and drop broken resistors, diodes, and LEDs to fix your busted fridge, oven, TV, or computer). The game is rated 12+ due to the implied sexual relations between the sims, but I doubt that anyone older than 7 will be entertained by these minigames.

I figure it will take about 10 hours to unlock all 73 goals, but you'll be bored with the game in half that time. The version I tested crashed more than once. Not recommended. 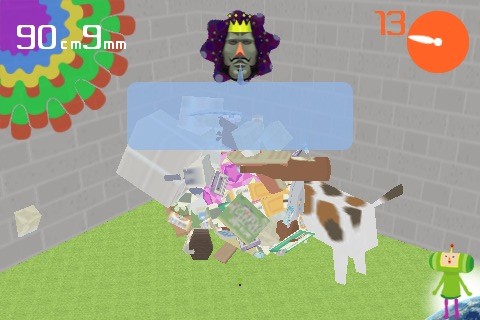 This is a slightly older app that I thought I'd mention because it's an interesting contrast to The Sims 3. It's another port of an established title, but this game benefits greatly from the iPhone's accelerometer. The premise is that you have a sticky Katamari ball that picks up objects as it rolls over them. You start with a tiny Katamari that's capable of collecting similarly tiny items -- like erasers and candies -- from a tabletop.  As your Katamari grows, it attains the ability to pick up cats, people, cars, houses, and eventually entire islands. Tilt the device left and right to change directions, and tilt up and down to decelerate and accelerate, respectively.

This game is terrific fun, and if you've played the original Katamari Damacy on PS2, you already know that the music is hilarious. Unfortunately, the iPhone incarnation of Katamari limits players to just five levels. Free demos of most PC games have more play value.

Recommended, but I wish there were more.

What I don't know is why these two ports of older games offer so little gameplay. Is it a technical limitation of the device? Is it because the developers, in their rush to service this new but very hot market, simply didn't have time to create more levels? Or -- more likely -- have they calculated that five hours of entertainment is a fair return on a ten dollar purchase? If that's the case, someone tell the people at NAMCO that I'd gladly pay extra to get more Katamari. 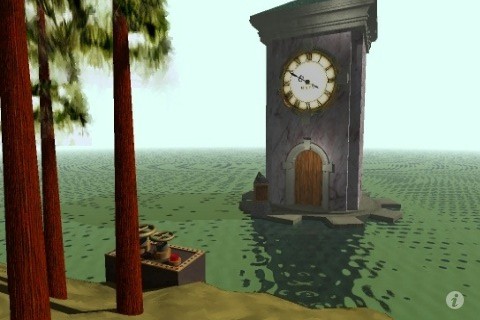 Another venerable title that I missed the first time around, this is the same Myst that you may have played during the 90s. That means the whole game is here, with the same puzzles and far more gameplay than you'll get out of The Sims 3. The graphics have been re-rendered, so they look a little better than they did back in the 20th Century, but scarcely any attempt has been made to adapt the game to the unique capabilities of the iPhone platform.  The help page advises players to "get a notebook or a journal, and write down anything that seems even vaguely appropriate [to any potential solution to the puzzles] -- you'll be glad you did." How frustrating.  I don't carry notebooks or journals anymore BECAUSE I HAVE AN IPOD TOUCH FOR THAT SORT OF THING.* Heavy irony. How hard would it have been to add a notebook feature to Myst itself? Not hard. Not hard at all.

Myst is legendary for its cryptic puzzles and immersive game play. In particular, the game's designers made a point of keeping the player's objectives a mystery that can only be discovered through patience, perserverance, and close observation. The usual model for iPhone games is to provide entertainment in short bursts, and the concentrated attention that Myst demands doesn't fit well with that. Much of my iPhone gaming happens during idle moments while I'm riding a bus, or waiting for my lawyer to arrive with the bail money. I can't play Myst in these situations lest I miss my bus stop, or let my guard down while I'm sharing a holding cell with Crazy Lester.

A qualified recommendation, then. But keep one eye on Lester.

Next time, I'll review three games that were developed specifically for iPhone and iPod Touch. See you then!