UFOs Sighted! - XCOM: The Board Game Is Now Available 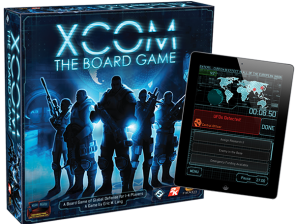 Calibrate your laboratory instruments, prep your Interceptors, and get your soldiers into battle armor. Reports of UFO sightings have now been confirmed. XCOM: The Board Game is now available!

You Are Humanity’s Last Hope

In XCOM: The Board Game, you and up to three friends assume the roles of the leaders of the elite, international organization known as XCOM. It is your job to defend humanity, quell the rising panic, and turn back the alien invasion.

Where the world’s militaries have failed to stand against the alien invaders, you must succeed. To do so, you must make strategic use of the resources available to you. You must launch Interceptors to shoot down alien UFOs, assign soldiers to key missions, research alien technology, and use that technology to defend your base, all while you try to keep the world from collapsing just long enough that you can coordinate one final mission to repel the invaders for good.

All the while, the game’s innovative and free digital companion app coordinates the alien invaders, randomly selecting from one of five different invasion plans. Each invasion plan represents a general outline that the alien commanders will use to coordinate the arrival of new UFOs, plan strikes against your base, and respond to your successes or failures as it seeks to conquer Earth. Moreover, the app manages all of these tasks and heighten’s the game’s tension as it forces you to respond in real-time.

Based on the critically acclaimed and much-beloved XCOM computer game series, XCOM: The Board Game has exploded into the media since we first announced the game ahead of Gen Con Indy 2014. Coverage has run across sites dedicated to board games, as well as those that traditionally focus more on computer games, and even such traditional news media outlets as The Guardian have remarked upon the game’s use of a digital companion app.

In fact, the game’s app and its integration into gameplay have been the most commonly discussed topics. However, many reviewers have also remarked upon the game’s novel and compelling interpretation of the XCOM experience. What’s common to nearly all reviews, though, are the claims that XCOM: The Board Game offers a unique take on XCOM, cooperative board gaming, and the hybridization of board and digital gaming.

It is that hybridization that interests The Guardian:

“The forthcoming XCOM board game gets the balance right, letting four players co-operate in saving the world from an alien invasion while a companion app tosses an element of randomisation into the mix – and lets one player pretend they’re hooked into the global defence network for real.”

The review from Polygon carries this idea even further and states it a bit more strongly:

“It's not a regular board game. It's a board game with a companion app, one that can be run inside a web browser or on a tablet. And the app isn't a gimmick. It's an integral part of how the board game works. It creates a tension that is wholly unique, bringing it closer to something like the Artemis Bridge Simulator or the indie iOS hit Spaceteam.”

Of course, it’s not just the use of the app that matters, but the end result, and the early review from PC Gamer offers an excellent summary of what XCOM: The Board Game brings to the XCOM experience:

“Most of the time, the theme of the videogame seems like a weird bolt-on to the cardboard version, both watering down what might be good gameplay mechanics and failing to create a meaningful connection to original game. XCOM: The Board Game avoids both of these traps, both delivering a new, fun coop experience and conjuring up the XCOM world in interesting ways.”

Can You Find a Way to Defeat the Unknown Foe?

Hello, Commander. In response to the alien threat, this council of nations has chosen to activate the XCOM project.

You are humanity’s last hope. Against an overwhelming alien invasion force, you and your friends must find a way to destroy UFOs, research alien technology, defend your base, and uncover the alien invasion plan. To do so, you’ll need better knowledge of the enemy, much of which you gain from our series of previews.

It’s time to save the world. XCOM: The Board Game is now available at your local retailer and online through our webstore!

XCOM: The Board Game is a cooperative board game of global defense for one to four players. As unknown alien invaders press their attack against the earth, you and up to three friends serve as the department heads of XCOM, an elite, international military organization. You must destroy UFOs, research alien technology, complete critical missions, and find some way to prevent the collapse of human civilization. You are humanity's last hope.