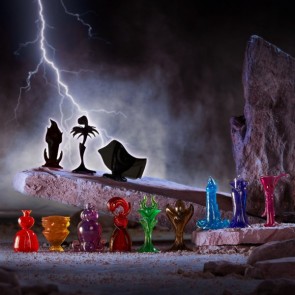 Game Name
Disney Villainous
There Will Be Games

Disney Villainous, the popular game family game, hinted in their social media at which villains will be included in the second expansion for the game.

A picture was released with the caption "THREE new foes are coming soon to Disney Villainous."  The picture included silhouettes of the next three villains.

Fans are speculating that the villains are Scar (Lion King), Yzma (The Emperor's New Groove), and either Ratigan (The Great Mouse Detective) or the Headless Horseman (The Legend of Sleepy Hollow).

The new expansion is expected to be officially announced at Gen Con in August.

Update July 12: The box was posted on the Target website early, confirming that the villians are Scar, Yzma, and Ratigan. July 27 was listed as the shipping date.