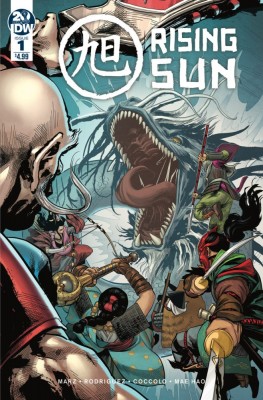 Game Name
Rising Sun
Publisher
CMON
There Will Be Games

Today IDW released the first of a three issue mini-series set in the world of the Rising Sun board game.

Written by Ron Marz and David Rodriguez, with art by Martín Coccolo. the comic tells the story of a group of warriors on a mission to save Japan from dragons and monsters. Each of the three issues in the mini-series will contain new exclusive playable content for the game Rising Sun. The first issue adds a new play mode with ninjas.

The comics are avalible in print or digital formats for $4.99 direct from IDW, or in print at retail comic outets.