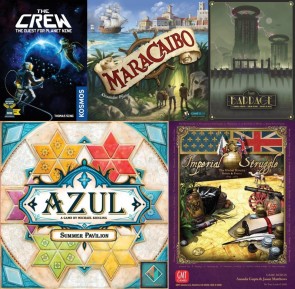 The IGA International Gamers Award Game of the Year nominees have been announced.

The winner will be announced at Essen Spiel.Digital.

The International Gamers Awards were founded in 1999 for the purpose of recognizing outstanding games, their designers, and the companies which publish them. The awards are international in scope, with committee members representing countries throughout the world.

ubarose replied the topic: #315256 16 Oct 2020 13:21
The games nominated for the IGA are usually pretty interesting, and worth taking note of. Although, it seems to me that they were more interesting back when Moo Frank was still a member.

More importantly, the judges are 20 men and 1 woman. They are all white/European except except for Dale Yu and Takuya Ono. WTF IGA. It's 2020.

Msample replied the topic: #315264 16 Oct 2020 14:50
Especially now with the market utterly glutted , awards mean less than zero IMO. How can anyone even begin to think they can comprehend even a fraction of the output ? Its way worse than trying to sift thru TV or film. And in those cases, they at least break it down into categories. Comparing IMPERIAL STRUGGLE to Azul is like comparing a BMW to a grapefruit.

ubarose replied the topic: #315266 16 Oct 2020 15:07
The actual award winner is less interesting than the list of nominations. I like perusing the long list of nominations (usually 15 games), but I couldn't find it for this year.

TWBG is just as white, if not whiter %-wise. Are we supposed to discount anything said here as a result? I'm one of the few non-white folks here and I'm super pale/white passing/whatever term, should I not feel like words here have weight? I don't get what this is trying to say.

Maracaibo is a real distasteful pick though.

Vysetron wrote: I must be confused as to the criticism here.

TWBG is just as white, if not whiter %-wise. Are we supposed to discount anything said here as a result? I'm one of the few non-white folks here and I'm super pale/white passing/whatever term, should I not feel like words here have weight? I don't get what this is trying to say.

Maracaibo is a real distasteful pick though.

The IGA is a prestigious committee that you must be invited to join. They were established in 1999 with the sole purpose being to judge and award the IGA. It is also the defacto old boy network of the board game world. I don't discount any of the members opinions. However, after 21 years, I would expect them to have inducted more than one woman into the club. And maybe expand their definition of "International" to mean slightly more International than the US, Europe (actually northern Europe except for Italy), Australia, Japan, and the Dutch guy that lives in Africa.

thegiantbrain replied the topic: #315284 17 Oct 2020 04:17
That is a very white list. Also just because the make up of this site is mostly white, doesn't preclude commenting on this kind of issue. Awards can be used to lift up minority voices in the industry, promote games that are a bit different to the mainstream, and improve the hobby for the better. We all benefit from more diverse voices at every level in the industry and Shellie is right to point out that only 1 women on the awards panel seems archaic, for want of a better word.

Nagajur replied the topic: #315333 18 Oct 2020 23:01
At Pax Unplugged last year, The Crew was one of the most popular games. What a great way to introduce classic trick taking cooperation. I can't ever imagine turning down a game.

Barrage is also super fun with plenty of opportunity that mess with your opponents plans and income. However, the crew is 5 min of rules and barrage is 45.
Read More...