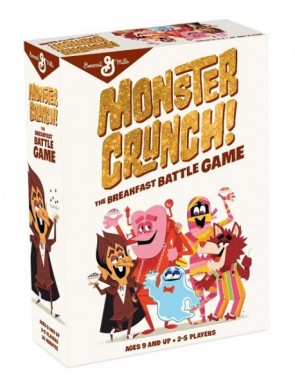 Target continues to expand it's "Only-at-Target" exclusive board games.

On July 30th, Target announce that they will be "rolling out 130+ new games—including 95 only-at-Target finds" in the coming year.

“We’re continuing to see double-digit growth thanks to hits like Oregon Trail and our vast assortment of curated exclusives—and the momentum shows no signs of slowing,” said Scott Nygaard, Target Senior Vice President – Merchandising. “So, we’re going even bigger into the trend, working with the leading game makers, specialty shops—and even kid inventors—to create more unforgettable, exclusive games for Target guests to love.”

Here are a few of them. I know that most of these may not be of interest to many of you, but it is interesting to see this happening at Target. When Star Trek Catan hit the clearance bins, I expected Target to see venturing into the hobby game market as a failed experiment. I was wrong.

Also, right now you can get 10% off a limited selection of games, one of which is the aforementioned Dude,  with the code GENCON.

Dude - the game where you say dude
North Star Games

A card game celebrating the grammatical versatility of the word as a question, an objection, an exclamation, an expression of wonder, and more. Each player in dude has a set of cards that show the word “dude” used in 6 different ways. All the players sit around a table saying “dude” in the different ways, all at once. Players are trying to find another player who they think is saying “dude” in the same way as them, by matching intonation, pronunciation and body language.

In More Dude players say the word, but now they must imitate a robot, a surfer, or other crazy characters shown on the cards.

A whodunit deduction and bluffing party game, where Alice tries to figure out who is the "Troublemaker."

Monster Crunch pits the classic "Monster Cereal" characters—Boo Berry, Count Chocula, Fruit Brute, Fruity Yummy Mummy, and Franken Berry—against each other to see who can eat the most cereal, by using their luck, strategy, and special abilities.

Players create art by combining abstract shapes and squiggles, then award points for each others’ creations.

One player acts as Kevin McCallister who must try to defend his home from the other players, acting as the Wet Bandits gang, who are trying to grab as much loot as they can.

A push-your-luck adventure game set in a video game world, your character runs a level avoiding monsters and collecting treasure.

Michael Barnes replied the topic: #278902 01 Aug 2018 14:02
There’s also a new Kwanchii-illustrated The Game, and a vampire edition of Nyctophobia. I would be shocked if we don’t see The Mind.

I love this. They are leaning too hard on novelty party games but some good choices.

Michael Barnes wrote: There’s also a new Kwanchii-illustrated The Game, and a vampire edition of Nyctophobia.

Both of those are 10% off with the code GENCON

fightcitymayor replied the topic: #278914 01 Aug 2018 16:21
So Target's marketing folks took a look at the free-money spigot that is Kickstarter and noted, "Hey, look at all of these upper middle class folks with disposable income throwing money at games that don't exist yet just so they can say they have some exclusive thing. We can totally do exclusive things!" Because I'm pretty sure that same upper middle class disposable income market is exactly Target's most desirable shopper.

p.s.
I still love cereal, but I often feel like the last of a dying breed. The kids don't eat cereal. Or so I am told. Do you eat cereal? Would you like to join my support group and/or subscribe to my newsletter?

ChristopherMD replied the topic: #278915 01 Aug 2018 16:29
I stopped drinking milk years ago (just stopped liking the taste) so cereal is out. I usually make a breakfast smoothie or eat a bar.

Michael Barnes wrote: There’s also a new Kwanchii-illustrated The Game, and a vampire edition of Nyctophobia. I would be shocked if we don’t see The Mind.

I think you're mistaken... I believe it *is* The Mind that Kwanchii illustrated.

fightcitymayor wrote: p.s.
I still love cereal, but I often feel like the last of a dying breed. The kids don't eat cereal. Or so I am told. Do you eat cereal? Would you like to join my support group and/or subscribe to my newsletter?

[rant]Supposedly millennials don't eat cereal because they don't have time to wash the bowl and spoon before going to work or school. That's some hilarious bullshit reasoning. I never had time to dishes in the morning either, but that didn't stop me from eating cereal. I do the dishes in the evening, and not necessarily every evening. If millennials don't want to eat cereal, that's fine with me, but they can stop bullshitting about it. Just own it.[/rant]

Shellhead replied the topic: #278920 01 Aug 2018 16:59
Maybe Christian Peterson could go to work for Target. Their headquarters is only eight miles away from Asmodee North America, so it would probably be a very reasonable commute for him.

Michael Barnes wrote: There’s also a new Kwanchii-illustrated The Game, and a vampire edition of Nyctophobia. I would be shocked if we don’t see The Mind.

I think you're mistaken... I believe it *is* The Mind that Kwanchii illustrated.

No, it’s a new version of The Game, without all of the weird Khorne-like graphic design. It’s colorful and bright.

Black Barney replied the topic: #278922 01 Aug 2018 17:22
Emily is a cereal fanatic so I only eat it when she’s with me. Luckily I have her for five straight weeks right now so it’s been a cereal bonanza. I got four different types of mini wheats and am going through them all. With whole milk it’s super good

ubarose replied the topic: #278925 01 Aug 2018 17:58
BTW, I have just been told by someone who knows what they are talking about, that Star Trek Catan sold like crazy. My local store clearing them out was an anomaly.

So sorry if I led anyone to believe it didn’t sell well.

ecargo replied the topic: #278928 01 Aug 2018 18:25
Just picked up Villainous (last copy) and Megaland from Target today. They are definitely dedicating a lot of space to hobby games.

repoman replied the topic: #278929 01 Aug 2018 18:28
I suspect Josh Look stroked out when he saw Monster Crunch
Either that or he's set up a tent outside target and will not leave until the game arrives.

Also, only Barney would consider mini wheat a suitable cereal for a kid. Get her some Fruit Loops for the love of Christ.

WadeMonnig replied the topic: #278931 01 Aug 2018 19:02
If Monster Crunch isn't packaged with a plastic bag with tons of cereal chits and Count Chocula mini hidden at the bottom, they missed the mark.

Doubt I'm going to buy the game, though. 95 exclusives? I didn't realize the shovel was that big. Yeesh.
Read More...