Democracy under Siege now in pre-order 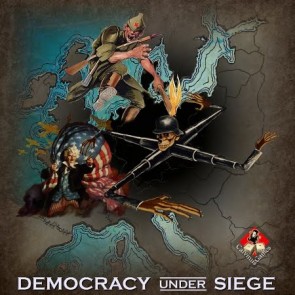 Publisher
4Dados
There Will Be Games

Democracy under Siege, a strategy game designed by Calvinus Games in 2010-2016, is now published by 4Dados (Spain) and is available in pre-order for Essen as announced here: https://www.boardgamegeek.com/thread/1599652/4dados-preorder-democracy-under-siege

Feb. 27: The burning of the Reichstag. Hitler blames his political opponents and enacts repressive laws.

Mar. 5: The Nazi Party wins the Federal elections amid a climate of fear and intimidation. From this point on, with a precise and constant rhythm, Hitler dismantles all of the democratic institutions of the fragile Weimar Republic and inaugurates a reign of terror, gradually establishing a ruthless and violent dictatorial regime.

The above is history, but what would have happened if, instead of bringing Europe into a maelstrom of war, the infamous Austrian corporal had abandoned his plan of global domination and taken the path of peace? Would World War II still have broken out? Or would the Nazi hierarchy and German industry still have pushed the Führer to war with Poland? What would the dream of a Greater Germany have been without Austria, Czechoslovakia and the other German territorial claims? Would the Western plutocrats or the Soviet colossus have fought the fascist dictatorship anyway and nevertheless inexorably triggered global conflict?

Democracy under Siege is an interactive simulation enabling you to explore all such questions. A card-driven strategy game, it reproduces the geopolitical conflicts and political struggles that led to the Second World War. The game covers the period 1933- 1940 and is designed for two or three players. Each takes the role of one of the three Ideologies - Democracy, Nazism and Communism - that struggled for power during the timeline of the game.

Democracy under Siege offers an accurate and detailed historical context, supported by 108 Strategy cards. Players exploit historical events and political actions to achieve political supremacy. Wars are simulated by an abstract combat system that allows players to intervene and influence their outcomes. The main concepts reproduced in the game are the ideological struggles among the major powers, the race for armaments ahead of World War II and the buildup of a network of diplomatic links with minor nations. All of these elements combine to determine victory.