Secret Weapons of the Third Reich now in pre-order 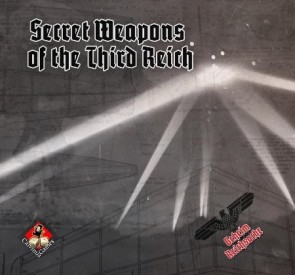 Publisher
4Dados
There Will Be Games

Secret Weapons of the Third Reich, a strategy game designed by Calvinus Games in 2015, is now published by 4Dados (Spain) and is available in pre-order for Essen as announced here: https://www.boardgamegeek.com/thread/1599654/4dados-preorder-secret-weapons-third-reich

The date: March 1938. The vast majority of Austrians cheer the Anschluss of their country by the German Reich. Central Europe is falling into Nazi hands and all the best European scientists will soon compete under the aegis of Heinrich Himmler, for whom no scheme is too wild or too improbable. But which team has the imagination, the courage and the drive to most successfully accomplish their goals?

Secret Weapons of the Third Reich is a game for one to four players simulating the arms race of World War II from the German perspective. From secret submarine bases in Greenland to the mysterious Base 211 in Neuschwabenland, Antarctica, this game recreates the incredible tales of Nazi technology, from the famous V-1 buzz bombs and V-2 rockets to the unlikely flying saucers derived from the work of Nikola Tesla. Will players be able to deliver the Haunebu project to completion? Will Hans Kammler escape with his last battalion of flying saucers to the dark side of the moon? Will the secret submarine fleet sail to Antarctica to pursue the war after the war? Or could German scientists produce an atomic bomb to be dropped on New York by an electro-gravitational flying saucer or within the warhead of a futuristic intercontinental V-3? Would it even be possible to build a huge solar satellite gun to strike America?

Discover the answers to all these questions in Secret Weapons of the Third Reich, the weirdly addictive semi-cooperative, semi-competitive worker placement game for all fans of science fiction and alternate history.

The game will be released with the Ahnenerbe mini-expansion:

The expansion adds 17 new cards, making the game more challenging and intriguing. Players will discover some unbelievable weapon projects developed or simply thought by the German scientists, such as the Silbervogel (a sort of shuttle), the Himmelsturmer flight-pack (yes, exactly like in Rocketeer movie!), the famous Messerchmitt Me-262 and the Me-163 "Komet", the enormous flying-wing bomber of the Horten brothers and more and more!