Some More Thoughts on Battles of Westeros 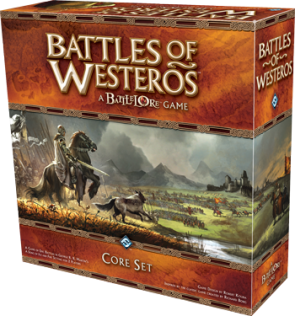 This was a difficult review to write because I do think that the game is good. The problem is, I think FFG has completely blundered the marketing and positioning of it as a product- which I think is potentially disastrous since this is intended to be your first purchase in a new flagship product line.

I don't know if this game will completely please anyone with its irrelevant George RR Martin licensing (which does practically nothing in terms of shaping the game play or core concept of the game) and the shameful come-on that the BATTLELORE brand suggests for fans of that game.  The strength of the game is in its quality game play, and I think Rob Kouba has done a fantastic job of really kind of making the Commands and Colors system his own- and it's a stronger, more detailed game than any other iteration of it. The unsubstantiated promises from FFG regarding the future of BATTLELORE, FFG's oddly defensive posture about the game, and the unnecessary saddling of the game with the SONG OF FIRE AND ICE and BATTLELORE names very much devalues the quality of the game and makes it feel like the cash-in, "CCG board game" that many were afraid of when the game was announced.

This game could absolutely stand on its own as a generic system for medieval warband-level battles. And FFG is at a stage where they shouldn't have to rely on this kind of gimmicky marketing to sell a game. The only brand it needs on the box is FFG.  For a company that has lately taken a lot of big strides and grown more confident in its ability to do business, with the event centers and the hubris to release two $100 titles in less than six months, it's weird to see them so defensive and seemingly uncertain about the game.

FFG would probably have us believe that the mixed response to the game was because of the mystery box thing and the hype built up there...but the truth is that they announced an awkward product that I'm not sure they have as much confidence in as they would have us believe. The FFG fan boys and girls will likely buy it and pump it up to the usual 8+ rating at BGG. BATTLELORE fans will be disappointed that all of the "lore" is gone. George Martin Fans will be disappointed that it really doesn't have anything to do with the books. And the rest of us? I guess we'll see what happens in the marketplace.

I'm also still miffed by the miniatures. Although they are on par with the also crappy figures in HORUS HERESY, they're just cheap, chintzy, and sloppily implemented. I don't care how much FFG claims that the miniatures are "high quality, detailed" or whatever- the fact of the matter is that their quality standard is significantly lower than it was in past releases. If they can't maintain the standards set by past products at a reasonable price point, then they either need to lower MSRPs or approach their product design differently.

So it's a toss-up. The good news is that there is a fun game in the box, and it is pretty complete without expansions if you don't care about having more unit variety or particular houses. The question is if you're willing to spend $80 on a "core set" of a product line that is confusingly marketed and with questionable future prospects for support.