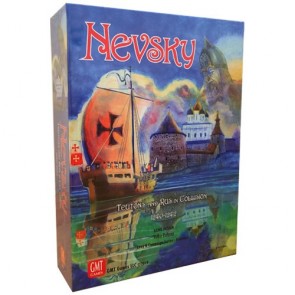 At a con this past weekend a friend and I took Nevsky out for our first crack at this new game. The rules are somewhat daunting when read in isolation without the components. In practice a lot of them make sense after a few turns. Most of it is because it is a brand new system containing new concepts that once you use them, become pretty easy to remember. The player aid cards are very well done and help a lot. The only real big thing that tripped us up at first was sieges, but seeing as how we didn't do any at first not a big deal. After we played, James went back and re-read the rules, and yeah we missed some stuff, but it’s to be expected in this sort of game. I'd advise you to just plow ahead your first go around, it will make a lot more sense playing vs trying to grok the rules which throw a lot of stuff at you.

At its heart, the game system is about marshaling and moving your forces. Notice I didn't say fighting . This game is not combat heavy. In the designers notes, Volko comments that there were only a hanful of battles in the two years modeled . Players have to keep a careful eye on the enlistment periods of their various lords. If pushed too hard they will go home - permanently. So players must balance using them for incursions into enemy territory to gain food and loot vs staying home to tax the locals. Loot can pay to extend service, but taxation monies are more flexible and can be paid in the field, enemy territory included. Loot must be carried home to be cashed in. Speaking of carrying, a core component is Transport assets. Depending on the season, you'll need Carts , Sleds, Boats, or Ships. Forces can always move but transport is required for Loot and Food ( Provender in game terms ). Without food you aren't going very far - especially since outside of Summer turns, you can't forage in enemy territory. Speaking of seasons, the four seasons have differing numbers of order cards allowed as well as effects on transport that can be used.

Each turn starts with a Muster phase, where you can disburse pay to lords, add transport points, and/or add Capability cards to lords to give them special abilities. Conversely at the end of each turn these same things often degrade/attrit. Its a balancing act to be sure.

We both started out somewhat tentatively, each of us sort of test driving our new cars - lords in this case - to see what they could do. Some raids on both sides resulted in Ravage markers being placed; we had an early battle in which I forced the Russian forces to retreat. Combat in the system is somewhat involved, but seeing as how it is rare, this isn't a show stopper. Basically range combat is followed by mounted then foot. Defender always fires first. Hits are calculated at a fixed rate per unit type then the other player rolls vs the armor rating of a unit. A single unit can deflect multiple hits until it misses its defense roll, then its Routed. Play continues til either all a sides units are Routed, or a player elects to Concede . The issue of refusing battle is an important one; Conceding is smart when a loss might push your troops to go home permanently.

While at first I had the upper hand in terms of forces on the map, my lords didn't gather enough pay to keep their men happy. Combined with some events, I soon found myself on the defense as the Russian forces bulked up and came sweeping across the countryside to lay waste to most of the Tuetonic hinterland. We called the game after my last lord got cornered in a castle along the coast and surrendered around turn 14 I think.

There are a lot of things going on and it’s easy to see this system going to other historical periods in the medieval era.  The initial learning curve is both steep and accessible at the same time - as I mentioned the player aid cards are first rate. I look forward to playing again (I have another play lined up this coming weekend ) as well as seeing other games using the same system. Nevsky is not a short game - while there are scenarios I feel the campaign game is the best option as the effects of seasonality and length of lord service really are felt more in the long run .

Gary Sax replied the topic: #306481 22 Jan 2020 08:33
Thank you for this! When following along with AARs of the game I found the battles fairly intimidating and procedural, sounds like I wasn't alone.

The concepts here really intrigued me, but the two player nature and lengthy playtime have held me back. Still mulling over whether I want to invest the time.

Gary Sax replied the topic: #307280 19 Feb 2020 16:23
Where are you at on this game these days? I've been keeping up with your plays in the board game plays thread but I'm curious how this is developing. Chris Farrell has been playing this a few times on instagram and he's not sure if it's just an interesting puzzle or a game that has a lot of back and forth and long term legs.

Also been seeing someone playtesting the next volume in this series in Spain (reconquista).
Read More...