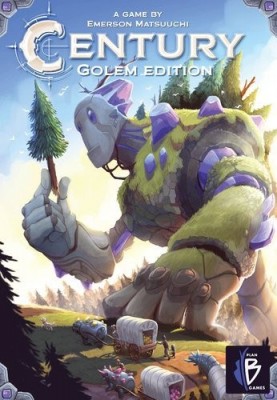 The recent announcement of the completion of the Century trilogy in Golem form had me returning to this gorgeous production and I was impressed with how much play this still has to it.

I am extremely sensitive to waiting for my turn and I famously refuse to play almost any game at five, however Century: Golem breaks through that.  The incredibly quick turns are very satisfying, but never so quick that you feel like you don’t have enough time to plan your next turn when it gets back to you.  The game itself never feels too complicated. It doesn’t shut out even the most beginner of players, yet remains interesting enough to capture advanced gamers’ attention. This is due to the timing of when you claim things being of the utmost importance, such that you can place players in unfortunate spots by waiting a turn for your claim.  The engine building aspect is also its own tricky beast, requiring balancing getting the best engine with not paying too much for it.

Century: Golem really does feel like a perfect modern pretender to Ticket to Ride’s throne. It is instantly accessible, deceptively deep, and stunningly beautiful. There are probably some gamer’s shelves that this doesn’t belong on, but I do feel it belongs on many.

Frohike replied the topic: #300394 02 Aug 2019 02:30
This is the only Century game I own and although it’s the most pared down color conversion game I’ve played, a few things get it to the table more often than I would think: it looks pretty, it plays quickly (both overall and turn by turn), and it’s dead simple to teach. This is definitely Ticket to Ride territory but with the added guilty pleasures of basic engine building and chunky acrylic crystals.