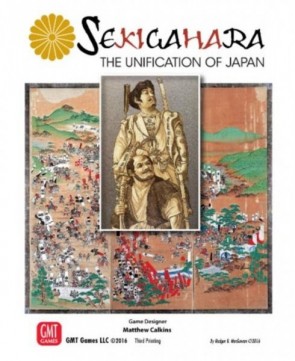 Sekigahara may seem like a souped up Stratego but instead presents a fascinating look of the orginizational level of the titular campaign.

I often introduce Sekigahara to people as “Super Stratego” thanks to the hidden blocks, but digging deeper into the system makes me feel like I’ve just been lying to people. There is such a breadth of info that you can’t possibly have more than just a cursory understanding of your opponents general pieces. Furthemore, the cards in hand dictating the orders really can’t be predicted too well either.  Instead Sekigahara feels much more about witnessing the incredible organizational feat that was the Warring States period in Japan.

You didn’t know which daimyo would listen to you in a given week or which troops would betray you in the heat of battle. It feels like anything could have happened in this campaign, moreso than any other war. This system captures that uncertainty so beautifully.  Even if you don’t want to get up close and personal with one of the most fascinating eras of history, Sekigahara is just an amazing puzzle that really hasn’t been replicated since.  All of that combined with its relative simplicity has me recommending this to nearly anyone who is entrenched in this hobby.

san il defanso replied the topic: #298077 07 Jun 2019 00:59
Sekigahara is such an outstanding game, I feel like it's ruined me on all other kinds of wargames. Its emphasis on ambiguity and bluff is exactly in my wheelhouse, and I feel like it somehow captures its conflict flawlessly with a relatively lean mechanical structure. Really a terrific game.

mc replied the topic: #298078 07 Jun 2019 01:11
Only had the opportunity to play this online at yucata and I really really dug it. Give me a hand of cards and I'm interested anyway but I loved the way that aspect interplayed with the block system and its bluffing. I love how control is handled. It all works really well to tell the story of the era and directs you into taking on the roles of the leaders too. Cautious Tokogawa and steely Ishida.

DukeofChutney replied the topic: #298134 07 Jun 2019 18:46
I've sometimes said this is my favourite game. It is probably the war game i've played most and it holds up reasonably well. I've 1st edition which slightly favours Tokugawa but not by much. Similar to Hannibal Rome Vs Carthage it does distill down to a few general patterns after a while but it never really seems to play out completely. I still love it.

Matt Thrower replied the topic: #298158 09 Jun 2019 06:13
I've always really enjoyed Sekigahara, but I've had mixed reactions from some folk I've played it with. The chief complaint seems to be that it often forces you into situations where you have to attack or defend with stacks, knowing that you don't have the cards to support them.

I can kind of see that, and it has lowered my opinion of the game a litle bit. But it's so exciting - and relatively short - that it gets a pass from me anyway.
Read More...