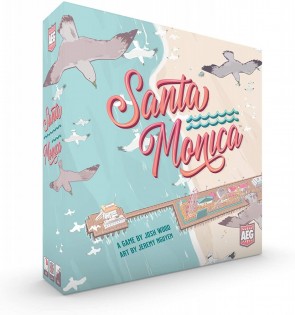 Santa Monica is a tiny game in an enormous box that my spouse describes as “not looking anything like a game”. A washed-out pastel view of seagulls soaring over a beachfront pier belies the tone of a surprisingly thinky puzzler – or not, as it’s the kind of game you can just toy around with casually as you build up a delightful beachfront scene and it responds equally well to either approach. Tourists begin to file in to town, represented by charming screenpainted meeple with cameras around their necks, a detail that adds a pseudo-nostalgic air of bygone days (or maybe the universal symbol for tourist hasn’t changed much despite the advent and acceleration of mobile technology). The locals, sporting hip sunglasses, also slouch around the beachfront, and the arrival and movement of these two breeds of wooden sun-lovers provides the interesting twist to the otherwise humdrum tableau building.

Depending on the ‘bonus tile’ mode that you are playing you will get some form of end of game penalty for milling crowds with nothing to do. They came to the beach to have fun after all, so you had better find some activities to keep them interested. Perhaps you will add a Volleyball game or a few deckchairs to your beach, or a handy information board, or a wide variety of other things. By shepherding visitors to these spots they find something to keep them occupied which both provide additional scoring opportunities as well as negating the endgame penalty. You also have a curiously blank looking VIP, we’ll graciously accept that their figurines are unpainted as they are trying to go about their day incognito, who will wander around and bestow their benevolence at every site that makes them happy. This is where the slight asymmetry comes into the game, just a tiny tease that ever so slightly skews the value of any given card into a different direction for each player.

Every time you place a card it is going to provide a varying mixture of scoring opportunities, an influx of new visitors, or allow you to move meeple around your burgeoning promenade. This can initially feel strongly like a puzzle and although there is outwardly some scope for min-maxing there is also a degree of chaos in what cards will be available to you on your next turn so best laid plans often dissipate into insubstantiality like sand running through your fingers. Equally gratifying results come from thinking about immediate needs rather than your longer-term plans.

It is however hideously overpriced – this is a twenty bucks game in a thirty bucks box and the unnecessarily oversized box is frustratingly wasteful – and the rules, despite being easy to read, miss out distinguishing the order of operation for a number of very obvious situations that can occur. We also refuse to use the term “sand dollar” for the awkwardly inserted faux currency that can be spent on taking special actions, preferring to refer to them as “sunny day” tokens or, as my daughter insists, "sand tomatoes" both of which seem so much more thematic and optimistic. So an ice cream with flake for designer Josh Wood and a dropped cone sadly splattered on the pavement for publisher AEG.

I would abridge my review of Santa Monica all the way down to ‘delightful’ and, if pushed, I might even be inclined to also utter the word ‘charming’.