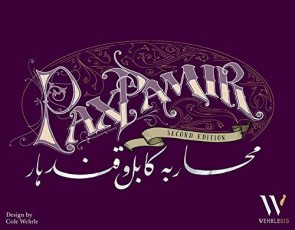 Pax Pamir has easily put itself in the running for my game of the year.

When I sat down for my first game of Pax Pamir with the knowledge that it has the DNA of Phil Eklund’s design school, I fully expected to nod to myself saying “that sure is a game with rules,” then promptly never return.  Instead I’m on my fourth play in three days, and am desperately hunting for an affordable copy.

First of all the game is gorgeous in a way that no other game is.  It tries to imitates the appearance of games of the time period while representing that period hostorically. It's a pretty cool touch and is executed perfectly.

Pax Pamir also plays almost like the perfect idea of a COIN game.  The rules are weird and evocative, but never so opaque that I tripped over them. Anyone who has touched historical games knows that this is basically the holy grail.  The game also played like the perfect stock game - constantly hunting for the correct alliances with enough interaction to make you feel clever when your plans dovetail with those of your opponent, but controlled enough that you don’t feel like you are just at the whims of the other players.  There are so many different axis to fight on and they all intersect with each other in just the right amounts.  You don’t feel overwhelmed with the connectedness but you don’t feel restricted either.  This game feels nearly perfect for what it is trying to be and I can’t wait to play it another 20 times.

Gary Sax replied the topic: #299246 05 Jul 2019 00:36
Yeah, the stock game part of this design is a good pull (picking the right side, staying at the front with the most loyalty (stock). It's also pretty unexpected in such a small design to have such a evocative stock market mechanism, sort of like a small Imperial.

Ah_Pook replied the topic: #299249 05 Jul 2019 08:06
I've only played one Solo learning game so far but this one seems pretty great. Should be getting my first legit play tonight and I'm pretty excited.
Read More...