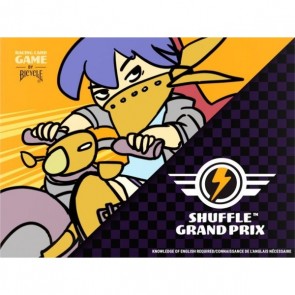 What do you do when a good game starts to show cracks?

Shuffle Grand Prix is a take-that card game that throws Mario Kart Double Dash, Smash Up, and Mille Bornes into a blender. That comparison is as impenetrable as it is accurate. Let me elaborate.

A quick draft during setup has you selecting two drivers, each with a unique half deck. Shuffle them together and you're set to draw your starting hand. Each turn begins with a draw from a central distance deck that pulls double duty as the game timer and the only source of points at the end. Most distance wins.

SGP is pretty simple to play. Draw distance, take an action, refill your hand. That's most turns. Of course it's an asymmetrical take that game, so card effects are all over the place and change that structure at every opportunity. Critically you don't win by beating down your opponents because that doesn't make you go further, so the majority of the cards aren't damage-y. Instead you'll try to pick off opponents when spinning them out would make them lose high value distance cards. Name a card effect and I can almost guarantee it's represented somewhere, plus 50 more you wouldn't have even thought of. It's a game of defense, timing, and wonkiness cranked up much higher than most games of its ilk.

I mentioned unique driver decks earlier. Each driver is definitely unique, but they aren't exactly created equal. Some drivers like Lev have incredibly situational abilities, often only functioning when you're already ahead. By contrast characters like Emma or Remus are incredibly solid defensively, meaning they can keep their distance up with relative ease and minimize risk.

And then there's Noodle. We need to talk about Noodle.

Noodle the cat deserves their own paragraph. Being a copycat, Noodle can use any other racer's ability whether they're in the game or not. They also have some of the most impactful cards in the entire game, as well as not a single one standing out as weak or overly niche. Noodle is a juggernaut. In the several games we played we had exactly one where the player who selected Noodle did NOT win.

This is the dilemma of SGP. It's a good take that game. Very good, as a matter of fact. It's approachable, appealing, and extremely well produced (unique art on every card!). Whether it's worth your time depends entirely on how much the previous paragraph bothers you. If the idea of an immortal cat god being a factor you have to play around and coordinate against makes you wince, look elsewhere. For the aggresively inclined that are still interested, you may want to give this one a spin.