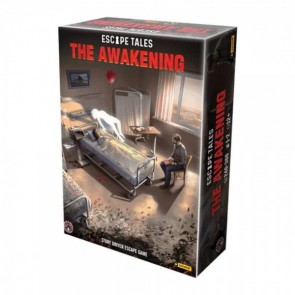 Game Name
Escape Tales: The Awakening
Publisher
Board and Dice
There Will Be Games

Escape Tales’ inagural entry is a mechanically smooth and fun experience with only minor hiccups.

Escape Tales the Awakening was pitched to me as Time Stories meets escape rooms in a 4 hour time frame and...that ended up hitting the mark pretty well.  The game was perfectly paced and didn’t commit what in my mind is the biggest sin of these kinds of games, punishing the players too harshly.  The mechanics were both tight and simple and the puzzles were satisfying and not too hard.

The main downsides arrive in the fact that some of the endings can be a downer and no one is going to play through multiple times despite that being an option.  The theme is pretty dark going as far to include some content that I’d like to have seen marked with a “”trigger warning”.  The puzzles also lean pretty darn “mathy”.  Nothing is above a junior high level but I was certainly surprised by the amount of puzzles that leaned on that particular skill.  It was a plus for my math major boyfriend and I, but could dissuade others.  That said I thoroughly enjoyed my time in the system and am excited to see the future of the series.