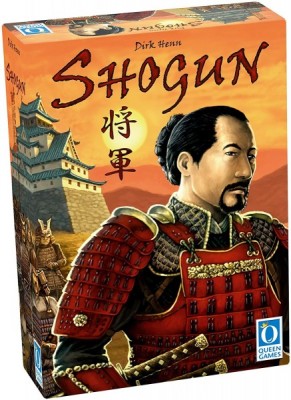 Shogun started off as my favorite game of all time, now it doesn’t crack my top 30.

I played far too many games of it where one person is dead to win at the halfway mark or even earlier.  There is no catchup mechanism. There is no incentive to leave players who are falling behind alone so they can rebuild. In fact the game almost encourages picking apart the carrion because it is so easy to capture.  Shogun doesn’t even offer an option for resignation(a feature that is frankly lacking from too many modern multiplayer wargames but I digress).

It may sound like I’m about to offer up my first negative review, but alas, I’m not quite there with Shogun. The central mechanism is far too fascinating, thematic, and strategically rich for me to banish the game to the ranks of the unplayables.  I just yearn for a remake, something that does this amazing idea justice.  The programmable movement so perfectly captures the treachery of the period, while allowing this complicated game to play fast and easy. Since all the mental heavy lifting is being done simultaneously, you get to experience almost no downtime. Then you get to watch in awe, horror, or excitement as you plans either crumble to dust or place you as shogun by the end.  I just wish this system had a cleaner more modern game behind it, but until then I’ll be sticking with the Sengoku Jidai period for my fix.

Matt Thrower wrote: You ever played Wallenstein? How does it compare in terms of people getting left behind?

I have not, I intend to at some point, but with them being the exact same system I’m not hopeful, I have a hard time envisioning geography changes being enough

Immortals tried to redo it and when I read the rules it seemed clear all of the changes were geared towards fixing my issues, but sour reviews have turned me away for now, I plan to get to that one eventually though

schlupp replied the topic: #298083 07 Jun 2019 06:28
We should organise another game of Wallenstein online at spielbyweb. We have played a lot of F:AT games, many of them hilarious and exciting. I'm too lazy to make an analysis of al our games, but a cursory glance suggests the leader after year 1 is far from the automatic winner (e.g. ozjesting's win after being 3rd with 17 points after year one (against 20 and 23 by two other players) and then finishing year 2 with 36 points (against 28 and 18 by the other two). Funny enough that was my comment at the time: "Damn, shitty end game for me and proves again that you should avoid - if possible - to be the leader after the first year."

Let me know, if you are interested. I'm sure we'll manage to get 5 people together here.
Read More...