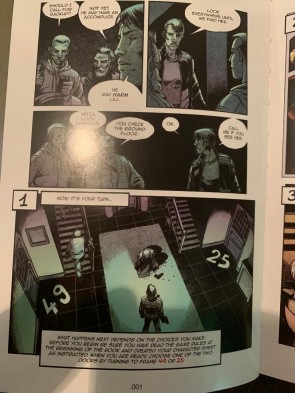 Captive is a story driven solo game in the form of a book that, from my view, makes nearly every wrong design descision.  The game blends a graphic novel with a choose your own adventure game, with slight RPG elements in the form of a character sheet.  Your choices mostly take the form of which door you want to go through in the house.  Very little exists in the way of clues as to which door is best to the point that you will often travel in circles because you didn’t realize you already came through that door.  There is a time mechanism as well that triggers at certain rooms, so wandering around aimlessly is not only likely, but also punished.

There is a health track on your character sheet which creates a nice sense of dread, but you then wonder why there is such a bevy of instant deaths that render the track limp.  The idea seems to be that you must try-and-try-again using your newfound knowledge from previous runs, but the labyrinthian layout of the house makes it nearly impossible to remember your last run effectively.  In addition, the dark tone and many panels of just doors to choose from makes rebooting the game feel like drudgery as opposed to excitement.  There are some cool moments of discovery in the mix and the art design is quite nice, but these are not enough to act as a bulwark against this frustrating and internally confused design.