THE HOBBIT: THE BATTLE OF THE FIVE ARMIES - Barney's Incorrect Five Second Reviews 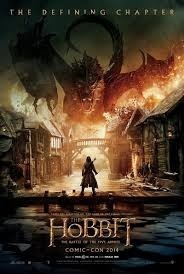 This is not a good movie. I had the worst meal I've had in a very long time right before and my friends and I couldn't decide which was worse. I think the movie was worse because at least I could talk to my friends during the meal as I picked pieces of egg and crab shell out of my teeth.

I'm a big Lord of the Rings fan and this left me very dissatisfied on so many levels. I honestly think Lucas' prequels were better films than these Hobbit movies but this one really takes the cake.

Halfway through The Fellowship of the Ring, I knew all the character names and faces. I've watched three of these Hobbit movies now and at the end of this one when you're saying goodbye to all these faces, I have NO IDEA what their names even are. I feel zero emotional connection to any of them, it's nuts.

Why did they leave Smaug unresolved at the end of the last one? If Return of the King had opened up with the Gandalf and Eomer and that thundering host coming down to save Helm's Deep, it would have seemed so shallow and meaningless. It would have really hurt both Return of the King and Two Towers. Return of the King won a ton of Academy awards. This shouldn't even get a nomination for special effects. Did anyone else that scene where Legolas is trying to walk up those stones that are falling from beneath him? It looked like an unfinished student project for an animation trade school.

It's just so bad. The saving graces are once again Dul Guldor scenes and the characters that fought in that scene. Thranduil was cool (what's with all the makeup on he and Legolas? Did they put ALL the base on their faces?) as was the elven army even though it couldn't look more CGI if it tried (again, so much in common with the Star Wars prequels).

I'm still having trouble arriving at the number five when i count up the armies.

I'll give it a pass rating because of the source content and SOME cool scenes but my god, this is a movie to avoid. It also gets insanely violent. The first half most of the deaths are off-camera but you will FEEL some of the up-close violence of the final act.