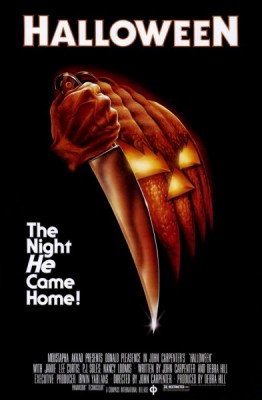 Everyone's entitled to one good scare.

That's what makes Halloween work so very well.  Set up.

In one of several homages to Psycho, Halloween opens up with the viewer taking on a first person voyeuristic role.  We move around the house, past the Jack-o-Lantern, around the bushes, taking a look in the window.  To us it's obvious what the two teenagers we're spying on are about to get up to, and thinking about it now, I think our vessel here knows it, too.  We look around, up at the upstairs window.  The light goes out.  We move back around the house, go inside and flip the lights.  The kitchen.  We open a drawer, draw a large butcher knife, and raise it above our head.  After seeing the boy leave, we find something on the floor.  A mask.  We put it on.  And there it is, ladies and gentlemen, the set up.  Our introduction to that heaving breathing.  It's a sound we'll be hearing a lot more of throughout the film, almost as if its a signal that it's time to tune out all the inane, teenage banter and to pay attention.

Isn't that all Michael Myers wanted anyway?  To be paid attention to?

That's not the only set up there though.  When we jump 15 years ahead in time, we no longer see the film from that first person perspective.  Yet once we start following the lives of Laurie and her friends (who really are jerks, for the record), just as Judith Myers and her boyfriend were in the first scene, they, and us by extension, are being watched.  That's really what keeps the tension going throughout Halloween, that these girls, in nearly every scene before the inevitable body count starts, are consistently being watched.  Stalked.  Hunted.  And for as much of a Trekkie as I am and the joy that James Kirk has brought to my heart over the years, that pale white William Shatner mask staring at you from across the street is completely unnerving.

One scene after another, Halloween is a collection of exceptionally well set up and well executed moments, enabling it to rise well above its shortcomings and slasher genre cliches.  It's another one of those rare horror films that hardly shows a drop of blood, instead using things like light and shadow or a figure in the distance to send shivers down your spine.  Some of it is rather subtle, like that quick shot of Annie opening her car door without her keys after we just saw her try to open it and it was locked.  And the sound.  The John Carpenter score is of course nothing short of iconic, having become ingrained into our pop culture DNA, but that breathing sound really is the star of the show here.  I suppose it's successful due to more than just the set up, but that's where it starts.

Is it the ultimate Halloween movie?  Of course not, I don't think any one movie could make that claim.  This season is full of too many wonderful, terrible, and wonderfully terrible things for any one film to fully encapsulate.  Yet it has become an essential part of my Halloween viewing, and every year I return to it and remember why that is.

stoic replied the topic: #213825 31 Oct 2015 18:03
Dr. Sam Loomis: I met him, fifteen years ago; I was told there was nothing left; no reason, no conscience, no understanding; and even the most rudimentary sense of life or death, of good or evil, right or wrong. I met this six-year-old child, with this blank, pale, emotionless face, and the blackest eyes...the devil's eyes. I spent eight years trying to reach him, and then another seven trying to keep him locked up because I realized that what was living behind that boy's eyes was purely and simply...EVIL.

Egg Shen replied the topic: #213898 02 Nov 2015 11:19
Just wanted to take a moment to thank Josh for providing tons of horror content to the site during Sept/ Oct. As a horror junkie it's been a treat coming to the site and seeing it taken over with lots of horror reviews/articles.

Halloween is a masterpiece. It's funny how it practically created the slasher craze in the 80s but most copycat films didn't crib the right stuff. Carpenter created a film that is moody, entertaining and at times edge of your seat exhilarating. I remember reading an article a few years ago that said kids of today don't find this film scary. I say that is bullshit. If you get off your cellphone, turn off the lights, crank up the volume and watch Halloween ALONE...it still works. It's a timeless film and certainly required viewing for any discerning horror fan.

Since I moved into my house, I've gotten really into Halloween (the holiday) and I start getting that itch somewhere in that last week of August. The monster cereals are the signal that it's fair game, and those show up first week of September and that's when I get really serious about watching horror movies. For some reason I've always felt I should make something productive out of it.

I've already got some ideas for next year. Shellie asked that I get a bunch of a articles in before we started running them, so I was not able to do requests. I think next year I'll get a topic in the forums going ahead of time so that I can get those in.

Pat II replied the topic: #214375 06 Nov 2015 18:53
Trying to sneak a viewing of this film on someone's VHS player when not everyone had one was a childhood experience I'll not soon forget.

...unless you actually mean a girl-girl
Read More...