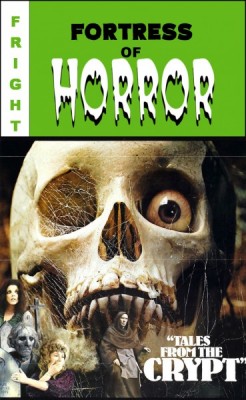 The Universal Monster movies were certainly my first foray into horror (not counting Ghostbusters), but Tales From the Crypt books, comics, and the TV show were my first ventures into a larger world.  Back in the early 90s, adaptations of stories from the comics were published as children's books, which is pretty strange when you think about it.  These are the stories that really set off an intense scrutiny of the comics industry back in the 1950s , and while they steered clear of stories like the infamous "Foul Play," my memory says they were still pretty gruesome.  Nonetheless, I was already a monster-obsessed kid and these books were very much in my wheelhouse.  I didn't have access to HBO, so the television series eluded my gaze temporarily, but the old comics were being reprinted around that time, so I picked up every one I could get my hands on at my aunt and uncle's comic shop.  I devoured those things.  I recognized there was a formula, stories of comeuppance with macabre, grizzly twists.  I wrote, drew, and distributed my own comics amongst my friends, thinking then it was a tribute when in reality it was a very cheap knockoff.  The HBO series eventually hit syndication, and I stayed up the latest I'd ever stayed up to watch (11:00 pm!).  When it moved to a 3 am time slot, I actually set my alarm to wake up just so I could see it.  Despite my fascination with all things Crypt, the 1972 film managed to elude me up until now.

Five strangers are taking a tour of a crypt, none of them fully aware of why the decided to do so.  When they become separated from their guide, they meet the mysterious Cryptkeepr.  He's not as repulsive as even his EC Comics version, nor does he spout puns with every sentence, but he's there and certainly carries a foreboding air about him.  One by one the strangers receive a vision of how they will die, each vision being a story from the comics.  Most recognizable to most people will probably be "And All Through the House," as this was also one of the most memorable episodes of the HBO series.  It's a simple story of a woman who kills her husband on Christmas Eve, only to be tormented by an escaped maniac in a Santa outfit moments later.  It's an even more minimalist take on the story that the TV show version, but because this movie plays it more straight, it's definitely the scarier of the two.  "Poetic Justice" is probably my favorite of the bunch, a sad story that stars none other than Peter Cushing.  I've always felt Cushing was a more diverse actor than given credit for, and this only goes to further prove that point.  He's so sympathetic here, it really is heartbreaking.  It has a violent ending I wasn't expecting, and though modern picture quality isn't doing it any favors, it features what might be my favorite zombie makeup ever.

There might be some pacing issues in a couple stories, even given the era in which they were made, but they're all very well done.  Just like the comics, Tales From the Crypt is all about endings.  Despite their age, a couple of the endings, "Wish You Were Here" and "Blind Alleys" will stick with you.  The sequel, Vault of Horror, is also good and has Tom Baker in it, but Crypt clear winner.  This has to be one of the most underrated horror films I've seen, highly recommended.

Mr. White replied the topic: #235357 03 Oct 2016 07:59
I've never heard of this movie and for the longest time while reading the review I was thinking this article was about the anthology film 'Creepshow'.

Creepshow manages to nail the EC vibe and feel like exactly what you'd expect given where it's coming from, Stephen King and the 80s George Romero. It's got a few creepy moments, but it's also very over the top and funny as well. Tales From the Crypt plays it totally straight despite some ridiculous situations and is thoroughly a _horror_ film. Creepshow will always have that one moment that will forever be with me, that part at the end of the last story with the roaches, while Tales From the Crypt has 3 of those moments.

TL;DR - They're both great, just depends on what you're looking for.

Mr. White wrote: I've never heard of this movie and for the longest time while reading the review I was thinking this article was about the anthology film 'Creepshow'.

I love Creepshow and think it holds up incredibly well. Josh and I actually just saw it recently at a movie theater a couple of weeks back. It plays incredibly well in a crowded cinema. It's the perfect blend of COLORFUL visuals, gross out effects, eerie stories, twist endings, and a big over the top tone. The best way to describe Creepshow is "fun". It's a playful horror film, that gleefully celebrates the old EC Comic stories in a very respectful manner.

Tales From the Crypt is also incredibly great, but it is tonally and stylistically the opposite of Creepshow. Both of them are essentially doing the same thing, adapting old EC Comicbook stories to the big screen, but the way they do it couldn't be different. Tales From the Crypt is a much quieter and subtle film. What it lacks in crazy violence and madcap antics it makes up for with refined performances and seriously fucked up twist endings. Some of the stories in this anthology film really hit me hard. They're incredibly creepy and most go for endings that affect your heart/soul rather than gross you out. Though there are a few great scenes of gore, it's certainly not the focus. I think this was produced by Amicus and it has that classic 1960s British horror feel to it. It's a horror movie, but it's got CLASS. Peter Cushing is absolutely terrific in his story and that one alone is worth the price of admission. If you're a fan of Hammer/Amicus and anthology films you need to check out Tales From the Crypt.

Edit - Looks like Josh beat me to the punch lol.

Michael Barnes replied the topic: #235430 03 Oct 2016 18:16
Yes, these Amicus "portmanteau" movies are a lot of fun if you dig the English horror thing. Tales From the Crypt is one of the better ones, but I actually prefer Vault of Horror. Torture Garden, House that Dripped Blood, From Beyond the Grave, Asylum, Doctor Terror's House of Horrors, Tales that Witness Madness...they all follow the same basic pattern (including one "funny" story each). They all have some absolutely dynamite British actors of the 1970s, too. Amicus was sort of Hammer's competitor at the time, but they focused more on these kinds of films and contemporary settings. So lots of English sideburns and terrible wallpaper. Good stuff, I'm going to dig all of my DVDs out tonight.
Read More...