Fortress of Horror 02 - The Babadook 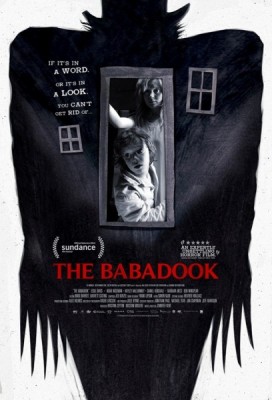 I can count on one hand the number of horror movies made in the last 15 years (though it's probably more than that) that I actually like.  After watching The Babadook, that count is still going on one hand though it is one higher.

This is a movie about a widow, Amelia, and her deeply trouble son, Samuel.  The kid has nightmares, is aggressive, and generally not well liked by anyone around him other than his mother.  The film does a fantastic job of putting you right at the level of stress that his mother is at right from the get go.  One night Samuel (don't call him the boy!) takes a book off the shelf for his mother to read to him called Mister Babadook.  What a mistake.  It's a nightmarish rhyme about a terrible creature called the Babadook that, once you let him in, you can't get rid of him and you're going to die.  It's like the work of deranged Dr. Seuss.  Samuel's nightmares get worse and he seems to start seeing the Babadook while awake.  Amelia tries to convince him it's just a book, it's not real, but everything really goes to shit when she starts to think that there really is something more sinister at work.  The less said from this point, the better.

Horror films don't often have the luxury of things like a solid cast and a clear, well executed artistic vision, but The Babadook does.  On that level it joins the lofty company of movies like Alien, The Shining, and Rosemary's Baby, a film I think it has quite a bit in common with.  They're both slow-burn horrors and they both do this wonderful thing where for much of the movie you question whether or not what the characters think are happening really are.  You sit there thinking, "Are they going crazy?" and the film does little to persuade you otherwise.  Even when it becomes clear as to what's going on your thoughts shift slightly to the realm of, "No, this can't be happening."  I find this storytelling trick to be infinitely admirable, keeps you on edge, and in the end is exhilarating.

While The Babadook has been critically praised, it still seems to have receive mixed reactions from viewers.  I find that to be sad as this is exactly the kind of movie horror needs right now.  Its vision is so fully realized, the performances are top notch and there are sequences that are truly chilling.  The "horror" here is universal, anyone could  fall victim to Mister Babadook, and it's this sort of thing that brings this genre to the height of its possibilities.

bendgar replied the topic: #211501 28 Sep 2015 14:04
This is a great horror movie that goes up to 11 if you have children of your own.
One thing that I love about this movie is that it is so focused. Every minute of it's (short by today's standard) hour and a half is building toward the ending.
The ending is also fantastic. I sat dumbfounded for several minutes after the credits rolled before coming to the conclusion that it HAD to end that way.

hotseatgames wrote: I liked this movie, and it's well worth watching. And I agree, most horror films suck. This one doesn't.

For me, it's that most recent horror movies suck, but I'm one of those people that think it's a sign of our times. That being said, in doing this column I've already found a handful of recent horror flicks that totally rule.

I'm a fan of the slow-burn though, and the kids just don't have the patience for that these days.

It stands up with the best of the best- I'm thinking the Jacques Tourneur films (Night of the Demon) as well as the films that he and other directors did with Val Lewton at RKO (Cat People, Seventh Victim, I Walked With a Zombie and so on) or The Haunting, The Shining, The Innocents and most definitely Rosemary's Baby. It makes for a nice companion piece to Rosemary's Baby- two horror films specifically with a female POV and working through issues of maternity and motherhood.

I found the movie to be unusually intimate and unsettling because it speaks not just to mothers but to parents in general about some of the unspoken feelings and "fears" of having kids. What if my kid is BAD? What if nobody like my kid? And it gives voice to these subtle, selfish moments that all parents encounter where they resent their child for their primacy, where they blame the child for loneliness, isolation or a loss of identity. It's kind of like postpartum depression, how the possibly negative feelings of many mothers are under-reported and often not discussed in the light of the assumed happiness and joy that a new baby brings. This movie digs in deep to some of the darker sides of parenting, and I think it does so in a profoundly impactful way. This is obviously not another Saw or Hostel potboiler and it stands a a great example of how sophisticated, intelligent and artful the horror genre can be.

The performances are out of the park in this one, which sells the entire picture. Effie Davis should have had an Oscar nomination. That kid is a masterstroke of casting- they had to find someone that could be THAT KID (you know the one) but not engender hate or dislike, even though he is sometimes right on the line. That is a challenging role for a young actor, and that kid aced it.

Sort of OT here...but Josh, have you seen Eyes of Fire (1983)? Please watch that this Halloween season. I think it's one of the best horror films of the 1980s...it's a little weird, a little silly in spots...but the concept and the atmosphere are just amazing. There's a new film coming out that's making waves on the festival circuit called The Witch that I SWEAR is a total ripoff ("homage") of it. It's fairly obscure though, it may be on a Torrent site or even YouTube. I have a bootleg DVD that's just a copy of the ol' Vestron VHS.

Every time I bring it up even around horror fans it's like "huh?"

Josh Look replied the topic: #211516 28 Sep 2015 17:10
Alright, adding it to the list. If there's anything else that you think I might like, pass it along. I have a feeling that we're sort of one the same page with this stuff, more into atmosphere and challenging ideas and feelings than whatever tired, repugnant bullshit Eli Roth, who I recognize as the Zack Snyder of horror, is throwing at the screen.

EXCELLENT point about HORROR vs TERROR. The amount of horror I've watched in the last three years or so has significantly increased and I've come to really recognize a difference there that was kind of lost on me when I was younger. It seems that mass audiences want TERROR and find HORROR to be too bothersome and too boring because it doesn't deliver the body count they want. Hence the idiotic comments I've seen about The Babadook. I was watching the first four Friday the 13th movies for the first time (which are more terrible than they are entertaining, you're not missing much) and as I started to them by the creativity of Jason's kills, I realized the appeal and thought there's a premise for a HORROR movie there. I feel like there was a trace of that in Cabin in the Woods but it sort of got lost in the rush to get about a dozen other ideas out.

Josh Look wrote: Holy shit, did you give me a tough one to find. No official DVD release and I'm not hipster enough to own a VHS player. It is on YouTube though, so I will be able to watch it.

Weird. I picked up a copy, I think at Sam's Club, after I saw it at the IU Cinema.

The soundtrack really got to me at the theater, not to the "Suspiria" level but pretty tough on the old nerves.

And I agree it might be more powerful for parents than for people without kids. A single buddy at work was not impressed after I went on about it.

Brewmiester wrote: Weird. I picked up a copy, I think at Sam's Club, after I saw it at the IU Cinema.


I'm talking about Eyes of Fire, the movie Michael recommended me, not The Babadook.

Mr. White replied the topic: #211532 28 Sep 2015 22:09
Sounds like I need to give this movie a watch. I thought Barnes didn't rate this so highly though. Maybe I'm confusing this with something else then?

Space Ghost replied the topic: #211539 29 Sep 2015 00:34
Well, you have rekindled my interest in this movie. I was pretty keen on seeing it at first; however, my mom gave it a pretty bad review -- and her tastes (and mine) generally hew fairly close to the movies you and Barnes are mentioning.

If it isn't on your list, I give a full endorsement for The Changeling with George C. Scott.

Space Ghost wrote: If it isn't on your list, I give a full endorsement for The Changeling with George C. Scott.

Best movie of this type I've ever seen.

<<I can count on one hand the number of horror movies made in the last 15 years..>>

Luckily, you'll likely need that other hand for my thoughtful suggestion.

Debbie Does Dallas. I think you'd like this one. Although the plot seems thin there is some real variety in the characterisations and the meta plot. Certainly a film that cannot be forgotten, particularly when alone in the house.

Pat II replied the topic: #213721 29 Oct 2015 20:46
Yeah the whole film was full of 80's technology - TV's, cars etc...except for that hand held device and the serious deterioration of Detroit - which I thought was easily the most unsettling part of the film after having been there several months earlier for the first time in 20 years.
Read More...