Fortress of Horror 04 - A Nightmare on Elm Street 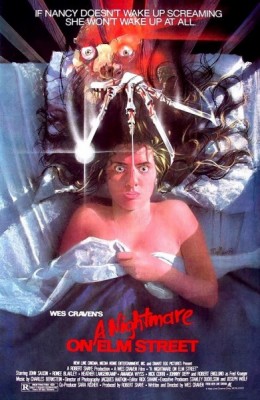 I think it's safe to say that I share a birthday with A Nightmare on Elm Street.  I was only two days ahead of it, close enough in my book.  Going back to where I can remember things clearly and vividly, I was aware of Freddy Krueger.  On my way to the Real Ghostbusters toys at the local department stores, Freddy was there.  On the posters announcing the new arrivals at the video store, Freddy was there.  Running the streets the first time I remember going trick or treating, adorned by one of the older kids in the neighborhood, Freddy was there.  Thirty years later, he's still here and is sure to come back.  The character, with his signature red and green sweater, fedora, and razor-fingered glove, has become ingrained into our cultural DNA.  Whenever a character hits that level of recognition, it's easy for it to lose its power.  This day and age, you'd be hard pressed to convince anyone over the age of 10 that Frankenstein and Dracula are scary.  Allan Moore says we're currently turning that corner in which Lovecraft's creations cease to have any effect.  Freddy and the Elm Street series has certainly been driven into the ground, but the strength of the first entry still stands.

One of the wonderful things that horror can do is change the way you look at something, be it the full moon, the girl at school nobody talked to, or the old house at the end of your street.  One of the lasting strengths of A Nightmare on Elm Street is its premise:  Freddy Krueger stalks a group of kids in their sleep.  While the rest of the slasher genre was intent to keep terrorizing misbehaving teenagers, Wes Craven brought the genre to a universal place in which no one is safe.  The horror taking place in dreams opened the door to some inventive film making, an opportunity that did not go to waste.  There's some imagery here that is downright iconic.  The silhouette of Freddy walking towards his prey, his elongated arms outstretched, the knives on his fingers screeching alongside the wall.  The girl in the bloody bodybag being dragged down the sterile, white halls of the high school.  The practical effects still hold up rather well.  I caught myself holding my breath at the end of scene where Freddy makes his first kill.  The first time I watched it I was left wondering how the hell they did it, and even now, knowing it was filmed in a spinning room, it still looks amazing.

If anything is working against A Nightmare on Elm Street, its the acting.  The dialogue isn't always exactly sharp, but the delivery is what really sinks it.  Nancy's father plays his role well enough and Nancy herself isn't half bad either.  It's her mother.  The orange lady.  You know who I'm talking about.  The part where she says, "I've got something better.  I'm going to get her some help."  Just the worst.  I know horror movies don't usually fetch Oscar-worthy performances, but what makes it so unfortunate is that everything else it firing on all cylinders, it feels like it deserved better.

It does have this Johnny Depp kid in it though, but I'm not sure if he's really going to make it big.

Michael Barnes replied the topic: #212045 06 Oct 2015 23:48
The night my parents bought their first top-loading, bigger-than-an-Xbox VCR, we rented movies at a grocery store. They were Terminator and Nightmare on Elm Street. I was 9. Responsible parenting right there.

Needless to say, this movie left a huge impression on me- there are images in this picture that are unforgettable, even if Freddy's legacy as a great screen monster has been destroyed by all of the later goofiness and buffoonery. That image of him in the boiler room, arms out and scratching with the claw in silhouette...that was great horror right there. I love how his arms are just slightly too long- it's that kind of subtle distortion that can make an image truly scary.

But yeah, conceptually this movie was just awesome- a slasher, yeah, but he came into your dreams. That was nuts. Very original. And the claw was such a unique and unusual element, it is really more like the kind of thing you'd see in a Dario Argento or Mario Bava film...something different than the Jason/Michael Myers butcher knife/machete/tool weapon, highly stylized and baroque. A stroke of genius, really.

I really like the ending too, with the trapped house...I thought that was really neat.

Other than Serpent and the Rainbow, it's definitely Craven's best film and if anything, it's actually become somewhat underrated or taken for granted over the years.

How about Candyman next, Josh? Or Phantasm?

Josh Look replied the topic: #212054 07 Oct 2015 07:01
You know, I've been thinking about revisiting Candyman this year. I remember thinking it was criminally underrated.

Despite what they turned Freddy into over the sequels, I do think it's worth mentioning Robert Englund's performance in this first movie. Any other movie that came out in this time could and often did have their antagonist played by a stunt man. Englund does something here that heralds back to the classic Universal monsters, actual acting put into that role. Not many people seem to notice it, but look at his posture, particularly in this film. He carried himself as if the arm with glove is significantly heavy. Such a brilliant little touch and it's my understanding that that was Robert's idea.

Man, Candyman was another very affecting horror movie, you're right. In the men's bathroom after the movie, my buddy Greg and I were screwing around and starting saying "Candyman...Candyman..." into the mirror. A WHOLE bunch of people yelled at us to not do that. If that isn't the mark of a really effective horror movie, i don't know what is.

Michael Barnes wrote: The night my parents bought their first top-loading, bigger-than-an-Xbox VCR, we rented movies at a grocery store. They were Terminator and Nightmare on Elm Street. I was 9. Responsible parenting right there.

You must have slept pretty well that night month.

This was another really popular series with the kids at school, right there with Friday the XIII. I've still never watched the first 2 instalments.

Iron Maiden trivia time: Bruce Dickinson contributed his solo song "Bring your Daughter...to the Slaughter" to the soundtrack for NoES V, and Steve Harris liked it so much that he used it on Maiden's so-so 1990 No Prayer for the Dying album and it became their biggest single from that one.

Now the old B/W version of "Night of the Living Dead" absolutely fucking terrified me. Saw it when I was 6 or 7. Holy shit.

Black Barney wrote: In the men's bathroom after the movie, my buddy Greg and I were screwing around

Hey buddy, this is a family site.

Is that a reference to that SNL skit?

I know who Bruce Dickenson is, that he's not at all like Christopher Walken (which I don't think they realized he's also the singer for Iron Maiden), but I cannot hear the mans name anymore and not think of that one line.

Columbob replied the topic: #212971 21 Oct 2015 12:03
When I first saw it around 99 or so, Bruce had just reintegrated the band (with Adrian), and I was totally confused by SNL's take, like it was this huge event (and for Maiden fans and metal in general it totally was), but there was nary a mention of the legendary band in there. Was there another legendary Bruce Dickinson? Or was it just a piss take? Never did the research or cared to.
Read More...