Won't You Be My Neighbor? - Barney's Incorrect Five Second Reviews 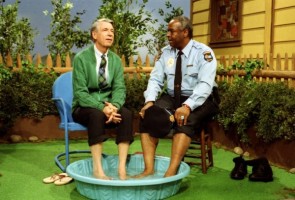 There Will Be Games
A pretty magical documentary on the career of one Fred Rogers and his life-long commitment to children.
This was a surprising movie as I wasn't exactly sure what the message was going to be. Right off the bat I had no idea that Fred Rogers was a minister, which really helps to contextualize how much he wanted to find a medium to give sermons on values in a brand new and very effective way.

The movie does a great job walking you through the beginnings and how unique his approach was on speaking directly to children's feelings. He had a gift in that respect. Then when he begins to try and reach adults in his own way, you can see how he is often less effective and naturally the movie slows a bit during these parts but that's still an important part of his story.

I didn't realize how he was able to address all these huge topics in his show (war, racism, 'am i a mistake?") in a way that is digestible and understandable for children. I should get my daughter Emily to watch the episode where one of his fish dies.

The film is worth watching just for the segments where he is communicating directly to children, live. Or when he explains how kids 'test' him in their first questions. Those segments are just pure magic and worth the price of admission alone.

I watched this show pretty religiously (no pun intended) as a kid and it's cool to see how authentic the process was. Also, how much he never went fast but always purposely went very slow. After all, what is the damn rush to do everything anyway? I wonder if today's kids would respond to his show, when he is simply showing a turtle walk across the carpet or literally showing an egg timer count down a minute, just so people can understand speed and time. Amazing.

I will say that it seems to be an unfortunate development in the last decade or two that any time a man shows or expresses a genuine love for children, that they are typically made out to be suspicious of either being a homosexual or some kind of closet abuser. I hate that this is the automatic thing that society seems to do to men.

By the way, talking to kids using puppets totally works. They do a great job at showcasing this and pretty much anyone can do it.

Oh, and yes I did get wet in the eyes a few times in this film.
There Will Be Games